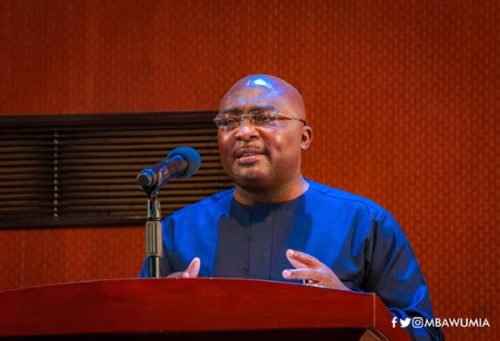 He says for Ghana to address its current economic crisis, fiscal and debt sustainability ought to be restored while limiting import dependency and retain the chunk of the country’s foreign exchange earnings.

Fiscal and debt sustainability, he said, was one of the key issues the Government put on the table in the negotiations with the International Monetary Fund.

“For us to address the current economic crisis, we have to take bold, difficult and firm decisions and adjust to the global and domestic realities.”

The Vice President said this in a keynote address delivered at the second edition of Standard Chartered Digital Banking Innovation and FinTech Festival in Accra on Wednesday.

The Vice President underscored the need for the nation to be self-reliant with regards to the mode of production of basic consumer items such as rice, tomatoes and toothpicks.

“Our foreign exchange regime is quite loose, and we must tighten it. We must change the nature of production and trade services because most of our foreign exchange earnings on trade do not stay in Ghana and so we’ve been having recurrent account deficit,” Dr Bawumia added.

Ghana is currently facing an economic crisis while the currency has lost 52% of its value against the US dollar since the beginning of the year and annual inflation has climbed above 37 per cent.

The country is also negotiating a $3bn (£2.6bn) bailout with the International Monetary Fund which it hopes will grant it access to the international capital markets.

Last week, traders closed down their stores for three days in protest of the economic conditions. Some Members of Parliament from the President’s New Patriotic Party on Tuesday (October 25, 2022) demanded the sacking of the Finance Minister, Ken Ofori-Atta and his Deputy, Charles Adu Boahen over the state of the economy and the depreciating cedi.

Bawumia is, however, positive the IMF deal will help put things on track.