Desiri Forest Reserve Decimated In The Name Of Community Mining 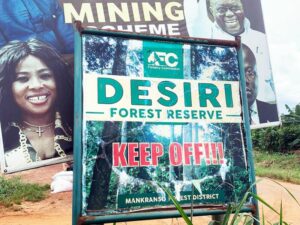 His anger is premised on the fact that the Forestry Commission has not given any permit to anyone to mine in the Disiri Forest Reserve. The District Forest manager emphasised that the Division has no hands in the ongoing illegal mining activities and has warned those engaged in it to stop the practice or face punitive measures as required by the law.

He stressed that the Forestry Commission would not entertain such criminal act at Disiri Forest Reserve, at Numesua, near Tepa in the Ahafo Ano North Municipality, and cautioned those involved to leave the forest. 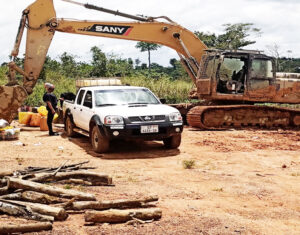 Speaking to the media, Mr. Agyemang explained that some faceless powers in the area are using community mining to desecrate the Disiri Forest Reserve, which government and other private developers have invested in.

According to him, temporal structures have been erected in the forest, which is being degraded by the operations of so-called community miners and thus destroying the water body and farmlands.

Mr. Agyemang complained that the current state of Disiri Forest Reserve is a major challenge confronting his outfit. 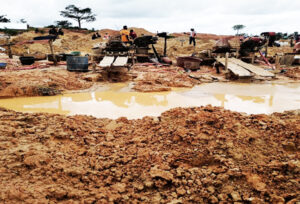 The current state of the forest reserve

He stressed that that though the numerous illegal miners are armed to the teeth, the Forestry Commission is determined to enforce the law and flush them out of the forest, to save the environment and water bodies from further degradation

The Forest Service Division Manager called for media support and cooperation to sensitise the public in the fight against illegal mining in the forest reserves.