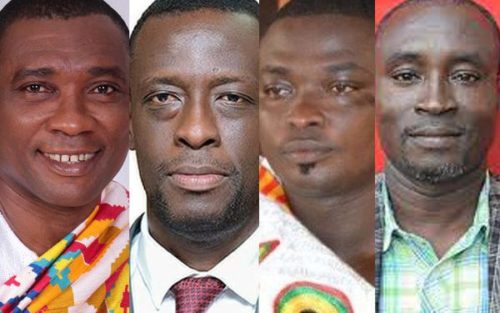 Barely 24 hours after he openly accused the Tarkwa -Nsuaem Municipal Chief Executive (MCE), Benjamin Kessie and Deputy Lands and Forestry Minister, George Mireku Duker, of being involved in Galamsey in the municipality, claimant to the Dompim-Pepesa stool, Nana Nyonwah Panyin IV, has gone into hiding after his family came under a life-threatening attack on Wednesday.

Nana Nyonwah Panyin IV, while narrating the incident on the Joy FM, yesterday, Thursday said his mother’s house was also set ablaze, while his nephew was inflicted with machete wounds by some known armed men on Wednesday, three of whom have been arrested by the police, who claimed the attack was about chieftaincy and not Galamsey.

Nana Nyonwah Panyin IV, had alleged that the assailants are assigns of Benjamin Kessie and George Mireku Duker.

He said the assailants, had accused him of trying to destroy their livelihood by revealing the names of those behind illegal mining in the area.

“If I should tell you what had transpired yesterday, it was an eyesore. Last three days, I had an interview with Captain Smart. After the interview, a group of men who say they are sympathizers or followers of Duker and Kesse said I want to take from their mouths the very food that they are eating.

“A mob of people rushed down to my mummy’s house and set the whole store ablaze…the gentleman in question is not a bodyguard, he is my nephew, a family member. The guy has been butchered lying in a pool of blood,” he narrated.

The victim has since been admitted to a private hospital in Tarkwa and is in critical condition. The self-acclaimed chief of Dompim-Pepesa noted that due to the current threat on his life, he has temporarily vacated the town.

“Kojo, I told you earlier on that I am not in Dompim and I do not have to tell you where I am, you know it. So I am not in Dompim but they call and give me updates on whatever is happening there…I need not to disclose to you my hideout.”

Responding to the question about his safety, he said “I am not [safe]”.

The Police have arrested three suspects in connection with the disturbances, and said that .

The suspects, Ibrahim Issah, Atanga Peter and Asonba Emmanuel, are alleged to be among the group of people who went on a rampage and inflicted machete wounds on the victim who is currently on admission receiving medical attention.

The attack, follows the allegation by Nana Nyonwah Panyin IV on Joy FM on Monday, October 10 that the MP for Tarkwa-Nsuaem, the MCE for the same area, and the Western Regional Minister, were hindering his efforts as the ‘Chief’ to end ‘galamsey’ in the area.

He claimed that these individuals were also engaging in illegal mining in the area.

Subsequently, a statement from the Dompim-Pepesa Divisional Council, said Nathaniel Dekyi, who is holding himself out as Nana Nyowah Panyin IV of Dompim Pepesa, is not a chief.

The Dompim Pepesa Divisional Council in a statement on Monday, October 10 said the “Council wants to state unequivocally that Nathaniel Dekyi is not the Chief of Dompim Pepesa.”

“We entreat the media and the general public to disregard any interview by him as he is not and has never been the Chief of Dompim Pepesa,” Nana Nyarkefole III, Secretary to the Council stated.

Contrary to the allegations that the MP for the area and others were involved in ‘galamsey’ in the community, the Council, said Nathaniel Dekyi is rather the individual involved in illegal mining as he has sold cocoa farms to illegal miners.

“The Council wishes to state on record that the said Nathaniel Dekyi is the Chief architect of illegal mining in Dompim Pepesa.

“Nathaniel Dekyi with his accomplices on video were caught discussing strategies as to how these illegal miners should operate in Dompim Pepesa. It is also part of his strategy to demoralize and thwart the effort of Hon. Mireku Duker, who has dedicated all his time and energy to fight the galamsey menace,” the Council noted in a statement.

The MP for the area, George Mireku Duker and the MCE, Benjamin Kesse, have all denied any involvement in ‘Galamsey’ activities.