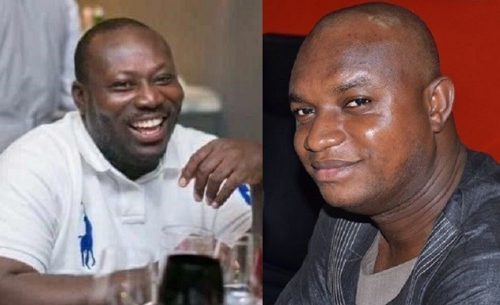 Barely 24hours to the national congress of the opposition National Democratic Congress(NDC), an Accra High Court has granted an injunction application against the party, its newly elected National Youth Organizer, and others.

The interim application is restraining the party and the Electoral Commission, the NDC congress planning committee from swearing in the National Youth Organizer-Elect, George Opare-Addo.

Opare-Addo was announced the winner of last Saturday’s national youth organizer election held at Cape Coast amidst violence. He beat his main opponent with 25 votes.

However, his close contender, Brogya Genfi alleged some irregularities and threatened legal action to challenge the outcome of the poll.

Today, the High Court Amasaman, has granted Brogya’s application for interim injunction against his party, the NDC, the NDC Congress Planning Committee Chairman, Alex Segbefia, the NDC Acting Director of Elections, Daniel Amartey, the Electoral Commission and George Opare Addo restraining them, their Agents and/or assigns from swearing-in George Opare Addo as the National Youth Organizer elect of the NDC.

The Defendants have been further restrained from holding the said George Opare Addo out as the National Youth Organizer elect of the NDC.

The application was filed by Brogya Genfi, a contestant in the just-ended National Youth Organizer election of the NDC, the TEIN President of UPSA, Ibrahim Rashid and Paul Amaldago, TEIN President for University of Ghana, Legon.

They are challenging the legality of George Opare Addo’s election on grounds that same violated two expressed orders/decisions of the High Court and the expressed directives of the National Democratic Congress.

The Plaintiffs are of the view that given the fact that the margin between the two candidates was only 25 votes, the said illegalities and infractions constituting 39 votes, significantly impacted the outcome of the elections. 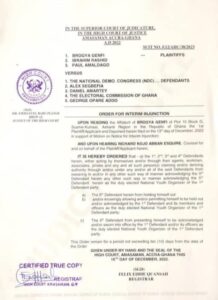 Previous Mosquito Dashes To Parliament… But NDC MPs are divided over his candidature
Next ‘It’ll take a miracle for the NPP to retain power in 2024’ – Dr. Amakye Boateng