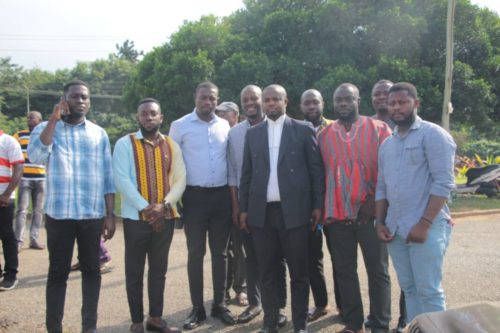 The ruling of the court Thursday December 8, 2022 comes less than 48 hours before the national youth organizer conference to be held in Cape Coast in the Central Region on Saturday December 10, 2022.

According to the plaintiff, the Constituency youth organizers their deputies and other youth executives making a total of six(6) delegates from Afram Plains South and Atewa West were not eligible to take part in the election because the Functional Executives committee of the party had nullified the elections in the said constituencies in a press release.

That, they ought not to have taken part in the election.

The plaintiff prayed the court to place a perpetual injunction restraining Richard Etornam Nyarko from holding himself as Regional Youth Organizer or any other executive within the Regional executive committee until a fresh election is conducted.

A declaration that Atiwa West and Afram Plains South illegally voted at the youth wing elections held on November 11, 2022, and an order to annul the Eastern Regional Youth wing election by virtue of the aforesaid infractions.

However, the defence counsel Lawyer Edudzi Tamakloe in an affidavit in opposition filed a subsequent press release issued by the Acting Director of Election at the NDC headquarters, Daniel Amartey, withdrawing their earlier decision and upholding the legitimacy of the election and the six delegates herein.

But the Judge, in his ruling, stated that the subsequent press release purportedly issued by Daniel Amartey is invalid since it lacks originality.

He also said the applicant stated he wrote a petition dated 14th November 2022 to the General Secretary of the NDC in which he raised the issues in his action and the application herein, three days after the elections as a means of using the internal mechanism for the issue to be addressed.

The petition was copied to all the appropriate structures of the party but was ignored.

The judge said “the situation where people in authority with the power to manipulate the conduct of elections has become a canker in our democratic dispensation which must be stopped. The conduct of elections is a human institution and therefore cannot be free from all the imperfections of human organization. But where some people deliberately prevent other candidates from picking or purchasing forms so as to prevent them from participating in elections, manipulating the electoral register, allowing delegates who are otherwise unqualified to take part in elections doing so to give an advantage to opposing candidates, massaging figures or simply employing such diabolical tactics do not lighten our burden on this journey to mature Democratic country” the judge said

He, therefore, upheld the application of the plaintiff and nullified the regional youth organizer election but said the court cannot direct the NDC to hold a fresh election since it is subject to the internal arrangement of the party.

“In the circumstances, it is declared that the 6 delegates from Atiwa West and Afram Plains South constituencies who participated and voted in the youth wing elections held on 11th November, 2022 were not entitled to have taken part which made their votes illegal. The said election is therefore declared null and void.

“Accordingly, respondents are restrained from upholding the youth wing elections of the 1st Respondent (NDC) held on 11th November, 2022. The 5th Respondent (Richard Etornam Nyarko) in particular is restrained from holding himself as a duly elected Eastern Regional youth organizer of the 1st Respondent or participating in any national or Regional executive committee or taking part in any elections in his capacity as or by virtue of having been elected as Youth organizer until fresh you wing elections are held”.

The judge concluded the ruling that “I cannot however grant relief 3 by ordering the 1st Respondent to liaise with the 4the respondent to organize a fresh Youth wing elections in the Eastern region since the party has the right to change its internal organisation and structures for elections and may put in place different structures for the effective and credible elections “.

Edudzi Tamakloe told the media that, he will consult his client for the next line of action. He said the ruling by the judge suggests he has made a determination on the substantive case.

However, Lawyer Isaac Larbi Esq, a member of the defence team said they may file a certiorari application against the ruling on grounds that the court proceeded to grant the reliefs on the writ in an injunction application when the merits of the case are yet to be determined.