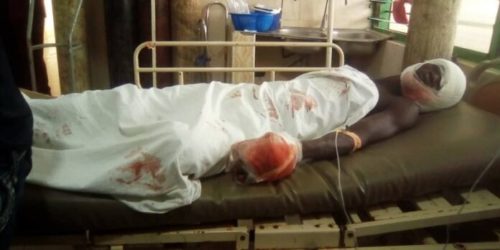 Residents of Assin Anwiasu in the Assin North District of the Central Region have been thrown into a state of shock and disbelief after an unknown assailant inflicted cutlass wounds on a 39-year-old man.

The victim, Kwabena Ebo, is currently battling for his life at St. Francis Xavier Hospital in Assin Fosu.

Eyewitnesses say they overheard the victim screaming for help in his room around 9:30 PM on Tuesday, December 20, 2022, when he had returned from work and was retiring to bed.

They rushed to the scene to find the victim in a pool of blood with his wrist and some of the fingers chopped off while his head, cheek, neck, and back had deep cuts.

He was then rushed to the St. Francis Xavier Hospital in Assin Fosu for intensive care.

The victim is said to have been married and blessed with 3 children.

Although the perpetrator is yet to be identified, the residents suspect one Fiifi, a jealous man who has consistently been engaging the victim in a serious alteration over the ownership of the victim’s lastborn baby.

The reports said the suspect claimed that sexual intercourse he had with the victim’s wife during their love affair resulted in the said child’s birth.

The chief of the Assin Anwiasu, Nana Yaw Kwanning Ababio who confirmed this revealed that he and his elders have sat to resolve that particular issue before.

He said they advised him to report the death threat to the police to take action but he refused, therefore they are surprised about the fallouts.

Meanwhile, a team of police officers in Assin Nyankomase upon hearing the incident swiftly visited the crime and visited the victim at the hospital to commence an investigation into the matter.