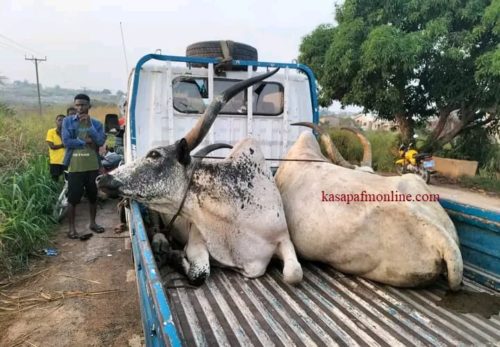 A 35-year-old man has been arrested by the police in Winneba in the Central Region for stealing two pregnant cows.

Information gathered by Kasapa News Yaw Boagyan revealed that four young men who stole the cows were escaping in a KIA truck from Kasoa church of Pentecost Convention area towards Winneba by going through Potsin and other neighboring towns to avoid being noticed and also avoid using the highway.

The cows were however spotted by some young men at the Liberian Camp who knew the owner of the cows and pursued the suspects with a motorbike until they caught up with the Kia truck with registration number CR-1960-12 at Osubonpanyin, a town in Winneba, in the Central Region.

Three of the suspects were smart and bolted away leaving one who is now in police custody at the Winneba Police Station.

The owner of the cows, Alhaji Fuseini Ali was informed and has identified them as his.

According to him, these pregnant cows were in their cage until Tuesday, December 13, 2022 morning when he visited the cage and realized they were nowhere to be found.

Police have commenced an investigation to arrest the remaining suspects.

Previous E/R: Man burnt to death in fire outbreak
Next NDC Youth Turmoil: “I’m ready to meet you in the gutters” — Pablo to Sam George