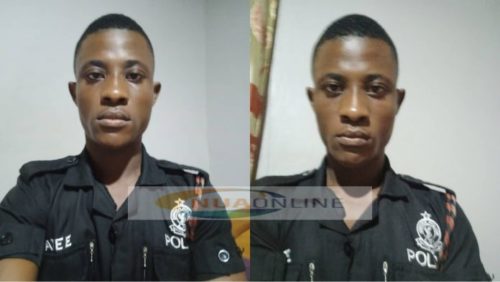 The Motor Traffic and Transport Department (MTTD) of the Awutu Bereku Police Command have arrested 28-year-old Isaac Osei for impersonating as a police officer.

He was arrested during a routine checkup on the Winneba – Kasoa highway.

Nana Yaw Asare reports the officers were on the highway Tuesday morning, December 20, 2022, when the suspect headed towards Winneba from the Kasoa direction of the boulevard with a Kia Salon vehicle.

After stopping him to demand papers which he couldn’t provide, they asked him to step down which he tried escaping under the pretext of being a police officer.

He stepped out of the car eventually in a police uniform with the name “Laryea” written on it.

Meanwhile, he had already informed the police he is called Isaac Osei.

Isaac removed some SIM cards from his phone and chewed them before the police officers during the interrogation according to sources.

He later confessed he is not an officer but rather took a friend who is a policeman’s uniform, after another uniform was found in the car.

He is currently assisting the police with investigations at the Awutu Bereku police cells.