C/R: Hunter shoots palm wine tapper after mistaking him for a deer 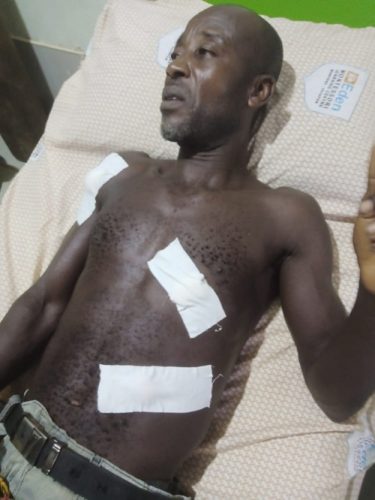 A popular palm wine Tapper at Kushia-Nyame-Yeduru in the Assin North District of the Central Region Samuel Bonney, a.k.a Laryea, missed death by a whisker after he was shot by a hunter who mistook him for a deer.

Information gathered by Kasapa News Yaw Boagyan indicated that the hunter went to his farm Tuesday, December 20, 2022, around 9:00 PM to hunt bush meat and upon reaching the farm where he shares a boundary with the Palm Wine Tapper, saw something he suspected to be a deer.

The hunter is said to have immediately shot at the creature not knowing he’d shot at his friend. The victim was shot in the stomach twice.

Though in pain, the victim managed to run home and now receiving treatment at Assin Praso Presbyterian Hospital.

The suspect is currently in police custody at Assin Praso pending an investigation to unravel facts before prosecution.

Tags C/R: Hunter shoots palm wine tapper after mistaking him for a deer

Previous Why Databank has closed its offices
Next Akufo-Addo to Announce Major Reshuffle ahead of New Year; 4 New Faces, 3 Sacks tabled