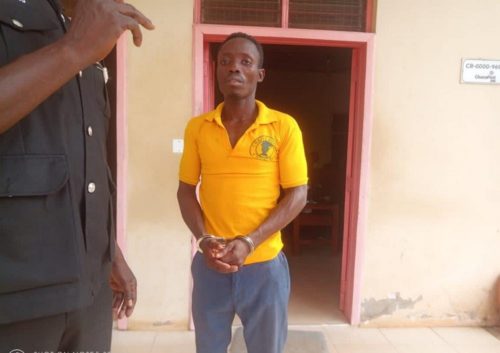 A pastor of Divine Favour Ministry Church at Asante Bekwai in the Ashanti Region, Kwaku Adinkrah, 43, has been convicted to a fine of ¢3,600 and in default will serve 12 months imprisonment for stealing items worth ¢2,500.00 from his girlfriend at Assin Atonsu.

The girlfriend, Miss. Sophia Yeboah, a hairdresser and a complainant in the case is a resident of Atonsu in the Assin Fosu Municipality of the Central Region.

The Assin Fosu District Court presided over by His Worship, Abdul Majid Iliasu, charged the convict with stealing, contrary to section 124 (1), of the criminal and other offenses Act 29 (60).

He pleaded guilty to the offense and was convicted accordingly.

Inspector Benjamin Doe-Kuwornu, the prosecutor, said on Tuesday, November 08, 2022, the complainant visited her parents in Kumasi and, while returning, met the convict in an Assin Fosu-bound vehicle.

The convict proposed love to the complainant and she agreed and the two exchanged contacts.

The convict paid a visit to the complainant’s house and workplace and the two started living as lovers.

During his stay, the convict told the complainant that he had a bad dream concerning where she worked.

On Saturday, November 26, 2022, while the two were at the complainant’s shop, the convict told her lover that he was going to town.

Unknown to the complainant the convict secretly took one key belonging to her, went home, and stole five pieces of wax print cloths, one piece of Kente cloth, three new towels, one iPhone six plus, one home theatre system, a standing fan, a bag of five kg rice and five sachet spaghetti valued at GH¢2,500.00 and left for Bekwai.

The complainant, upon arrival at home, discovered that the said items had been stolen and when she contacted the convict, the convict confessed to the complainant that he was the one who stole the items.

On Saturday, December 03, 2022, at about 14:00 hours, the convict was spotted in town by a friend of the complainant who informed her, and they lodged a complaint to the Police leading to his arrest.

The Police, during an investigation, retrieved the items which include the Kente cloth, home theatre system, standing fan, and the iPhone six plus from him.

The convict told the court that his immediate family had already used the 5kg Rice and the sachets of spaghetti and hence could not retrieve it.

He thus pleaded with the court to be lenient with him.