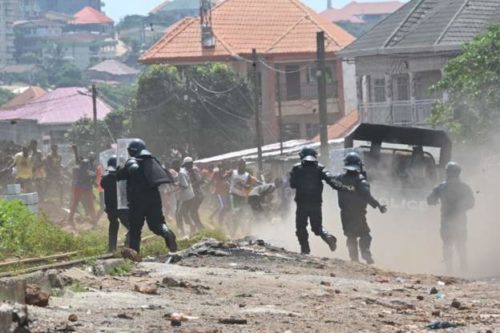 At least three civilians were shot dead in protests against Guinea’s military leaders on Thursday, an opposition coalition and the country’s justice minister said on Friday.

Guinea’s top prosecutor has called for a crackdown on protest organisers and participants, according to the AFP new agency.

Thursday’s rally was called by the outlawed opposition National Front for the Defence of the Constitution (FNDC), which calls Guinea’s military rulers “dictatorial” and is demanding the return of civilian rule and the release of political prisoners.

Since the elected but unpopular government was overthrown in a coup last September, Guinea has been suspended by West African regional grouping Ecowas, who want military leaders to shorten the 39-month transition period they’ve announced.

Ecowas has warned that it will mete out “more severe sanctions” than those already in place if Guinea does not comply.

Previous First Lady apologises to Nigerians
Next “1D1F: 17 Completed; 16 Under Construction In The Eastern Region” – Akufo-Addo