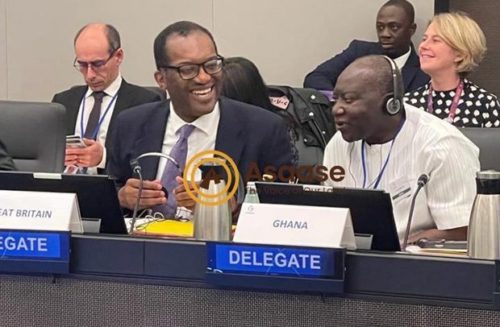 after 38 days following his economic plans which caused chaos in the UK’s financial markets.

The government was forced to rip up key sections of his mini-Budget in the wake of two weeks of economic chaos.

Kwasi Kwarteng is said not to be the only casualty as DGN Online understands that Chris Philp, Chief Secretary to the Treasury, could also be removed as part of a reshuffle of Truss’s top team.

Kwarteng returned early from a trip to the US, where he held meetings with fellow finance ministers, as anger grew among his own party over his growth plan announced last month.

In a letter confirming the move, Kwarteng wrote: “You have asked me to stand aside as your Chancellor. I have accepted.

“When you asked me to serve as your Chancellor, I did so in full knowledge that the situation we faced was incredibly difficult, with rising global interest rates and energy prices. However, your vision of optimism, growth and change was right.

See also  I'll support E - Levy fight on one condition - A. Plus

“As I have said many times in the past weeks, following the status quo was simply not an option. For too long this country has been dogged by low growth rates and high taxation — that must still change if this country is to succeed.”

Kwarteng continued that the economic situation had “changed rapidly” since announcing his mini-budget in September.

“In response, together with the Bank of England and excellent officials at the Treasury we have responded to those events, and I commend my officials for their dedication,” he said.

“It is important now as we move forward to emphasise your government’s commitment to fiscal discipline. The Medium-Term Fiscal Plan is crucial to this end, and I look forward to supporting you and my successor to achieve that from the backbenches.”

Kwasi Kwarteng said he believes in her “vision”, adding that “We have been colleagues and friends for many years. In that time, I have seen your dedication and determination.

“I believe your vision is the right one. It has been an honour to serve as your first Chancellor.

“Your success is this country’s success and I wish you well.”

His removal from the post after just 38 days makes him the second shortest serving chancellor, with only Iain Macleod, who died after 30 days in the job, holding the post for less time.

According to a report carried by SKY News that the removal of Kwarteng and Philp were an attempt by Truss to “put clear blue water between the shit show and her.”

It comes after the government were forced to make a second major U-turn on their economic plans, opting to keep the planned corporation tax rise due to come into force next year, after initially planning to scrap the rise. Earlier this month, Truss announced the government was also not pressing ahead with their plans to scrap the top 45 per cent rate of income tax following a major backlash.

It will put further pressure on Liz Truss, who strongly supported the chancellor’s mini-Budget, which she said was crucial to shoring up the UK economy.

But the plans triggered chaos in the UK markets with major fluctuations in the value of the pound, and a significant drop in the value of UK government bonds, which forced the Bank of England to make several major interventions to shore up pension funds exposed to the bonds.

Speaking on Thursday, Kwarteng had rejected suggestions he could be removed from post if the government were forced to make further U-turns, saying he was “100 per cent not going anywhere”.

Truss’s plans to cut taxes had also played a major part of her leadership pitch to Conservative members during summer meaning the decision to sack Kwarteng will raise further questions over her future as Prime Minister.

The party has also suffered a severe drop in support, with some polls giving Labour a 33 point lead over Truss’s party.