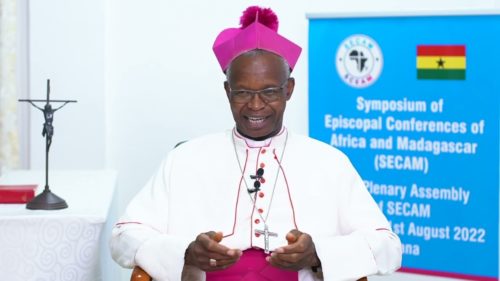 The mortal remains of the late Cardinal Richard Kuuia Baawobr, the former head of the Catholic Church in Africa will be flown into Ghana on December 8, 2022 from the Vatican.

MyNewsGh.com has confirmed that he body will be flown to the Wa Diocese after a requiem service at the Holy Spirit Cathedral, Adabraka, on the 9th of December, 2022.

“On the Solemnity of the Immaculate Conception (8th December, 2022) the mortal remains of His Eminence Richard Kuuia Baawobr will arrive in Ghana.

The body will be flown to the Wa Diocese after a Funeral Mass at the Holy Spirit Cathedral, Adabraka, on the 9th of December, 2022. Further details will be given later. May God rest his gentle soul.  Jesus is Lord!” a statement detailing the chronology of events said.

His Eminence Richard Kuuia Baawobr who was head of the Catholic Church in Africa died on Sunday November 17, 2022.

An official statement from the Vatican read “With sadness and pain we hereby inform you of the return to the heavenly Father of Cardinal Richard Baawobr which occurred today, Sunday, 27 November 2022. Our confrere was taken by ambulance from the Generalate to the Gemelli Hospital at 5.45pm and we received the sad news at 6.25pm. May Richard rest in the peace of his Lord whom he so generously served. On behalf of the bereaved Society. Our prayer and our thoughts go also to his family, to his diocese, his fellow bishops, to all his friends and acquaintances”André-Léon Simonart, Secretary General wrote.

In August this year, Cardinal Richard Kuuia Baawobr was said to have taken ill upon his arrival in Rome.

Cardinal Richard Kuuia Baawobr according to the information available to MyNewsGh.com underwent surgery because he’s suffering a heart-related condition but died months later.

Until his appointment by the Holy Father of the Catholic Church, he was the Catholic Bishop in charge of the Wa Diocese in the Upper West Region of Ghana.

Previous Who will monitor your appointees’ use of V8s? – Mahama jabs Akufo-Addo
Next It’s a lie, no woman can sleep in Black Stars camp – Abiba Locks