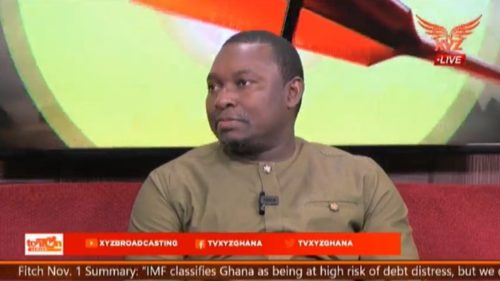 A member of the New Patriotic Party’s (NPP) communication team Solomon Owusu has advised Ghanaians to blame the Members of Parliament (MPs) for the country’s huge debt.

He argued that the Executive does not have the power to acquire any loan without the approval of the Parliamentarians, hence both sides of the law-making chamber ought to be blamed as the country’s debt to GDP soars.

“If any problem arises, then it should be a shared responsibility between the Parliamentarians and the Executive,”Mr Owusu said on Dwaboase on TV XYZ.

He further noted that, the members of Parliament are the representatives of the people therefore it’s their duty to explain issues of the House to Ghanaians.

The NPP communicator told host Prince Minkah that if the Parliamentarians agree to the programs and initiatives the executive presents to them, then they are also responsible for the government’s success or otherwise.

Although he agreed to the fact that the country is fond of acquiring loans, Owusu however pointed out that a loan in itself is not a bad thing.

“A loan is not a bad thing depending on what it is used for. If it can be used to generate revenue, then it is a good thing,” he added.

Moving on, Solomon Owusu noted that Ghana’s loans are mostly used for interest payment on loans and payment of salaries so unless the country start producing and exporting to earn foreign exchange, the country will be stuck at its present state.

Solomon Owusu’s comment comes on the back of Ghana’s economic downturn which the Minority in parliament have blamed on excessive borrowing that was pushed into consumption.

The International Monetary Fund (IMF) recently projected Ghana’s Debt-to-GDP to be 90.7 per cent by the end of 2022.

This was captured in its Fiscal Outlook Report released on the sidelines of the on-going IMF/World Bank Annual meetings in Washington DC, USA.

According to the IMF, revenue expressed as a ratio of GDP could also hit 14.1 per cent at the end of 2022.

Ghana is currently undergoing Debt Sustainability Analysis with the IMF and the World Bank. This is expected to help the country ascertain the true levels of the debt stock.

The country was recently classified as a High Risk of Debt Distress by the World Bank and IMF in its Debt Sustainability Analysis.

According to the UK based firm, the government will have to significantly cut capital expenditure or impose new taxes to boost revenue in order to address the financial challenges in the economy.

This it believes will help narrow the financial gap and create fiscal space going forward.

Previous Economic Hardship Can Be Rationalized – Richard Ahiagbah Rubbishes “Ku Me Preko” demo.
Next ‘Vote for NDC’ comment by Akufo-Addo in Kumasi was a mistake – NPP communicator [Watch Video]