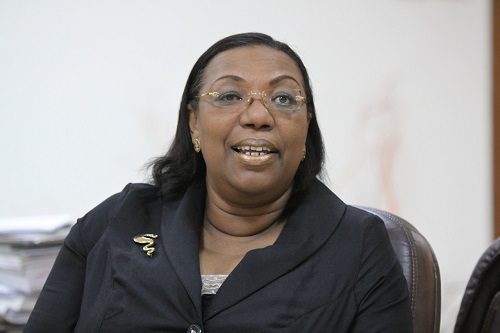 Former First Vice Chairperson of the National Democratic Congress (NDC) Betty Mould-Iddrisu has expressed her disappointment over the number of female candidates that contested and won national executive positions at the party’s 10th National Delegates Congress held at the Accra Sports Stadium over the weekend.

According to Madam Betty Mould-Iddrisu, Ghana’s first female Attorney General and Minister of Justice, women must be there at the top level of political operations other than the usual Women Organizer and perhaps few deputy positions.

“I am disappointed that as the NDC, we have not been able to attract more women at that level of politics. How can I be satisfied? I expected to witness a 40 or 50/50 balance of male and female candidates,” she said.

“How many women vied for the National Chairman, how many women contested for General Secretary? That is why I put myself up forward four years ago to prove that women can break through that invisible glass ceiling,” stated the 2017 Chairmanship Candidate for NDC in an interview on 3FM Sunrise morning show on Monday.

However, Ghana has signed on to various international protocols and conventions, pledging to ensure 30 to 40% representation of women to which an Affirmative Action Bill was drafted in 2011 but yet to be passed after eleven years.

The former Minister of Education maintained that the party has the capacity to select very competent officers to occupy national executive positions, adding that the NDC has a victory in 2024, and it is essential that the party gathers and work towards that victory.