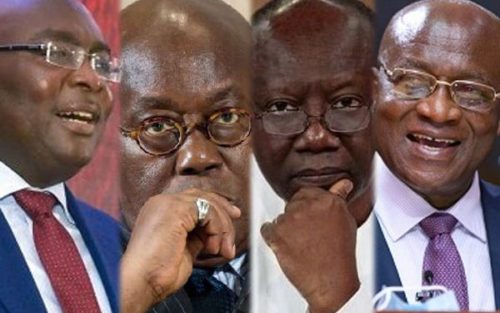 The Herald is picking up reports about deepening cracks within the ruling New Patriotic Party (NPP) which might be difficult to patch-up going into the 2024 Presidential and Parliamentary elections.

The widening divisions are seen as a result of the demand for the head of the Finance Minister, Ken Ofori-Atta and the feeling within the NPP that, President Nana Akufo-Addo, had refused to heed to public opinion to sack his cousin, whose abysmal performance as the administrator of the public purse, is sending the ruling party into opposition.

Beyond the 95 NPP Members of Parliament (MPs) who stepped out recently, many party insiders hold the view that Mr Ofori-Atta must go, to save the party from an embarrassing defeat at the 2024 polls.

Particularly unhappy, with the President’s refusal to sack his cousin, is the camp of Vice-President Dr Mahamudu Bawumia.

Bawumia;s camp feel that his popularity is waning by the day with the economic hardship in the country; something he was projected by the President himself since 2008 when he first emerged as his running mate, to solve.

Some within the NPP, argue that the President, who recently admitted in a national address that the country is in economic crisis, should have constituted an emergency committee led by Dr Bawumia with Mr Ofori-Atta as a member, to engage the International Monetary Fund (IMF) on the US$3 billion bailout that the country is seeking.

Many top echelons of the party, are of the view that the Finance Minister, is not making an impact in the negotiation with the IMF, because he had lost credibility in the sight of the fund managers, especially with his utterances that Ghana, was not going to go to the IMF for a bailout if the E-Levy was passed into rake in some GHs 6.9 billion (US$1.1 billion).

However, the government, has been struggling since then with revenue mobilization and have had to rush to the IMF for the bailout.

Interestingly, Dr Bawumia, has not been supportive of the E-Levy and had publicly argued against it even in an interview on Peace FM.

There are reports of Mr Ofori-Atta’s disrespect for the Vice-President by refusing to attend meetings of the Economic Management Team (EMT) and running the Finance Ministry with his team of workers from his private company, Databank Financial Services.

Many party insiders, feel that the President is unable to control his family members in his government, especially the Finance Minister, hence the state of the economy.

Again, the constant remark by the President that Ken Ofori-Atta contributed financially to support his 2008, the 2012 and 2016 elections campaigns, have led to the conflict of interest issues with companies tied to him, including the Data Bank Financial Services, Enterprise Insurance and Transition Funeral Home working on all government bonds, insurance policies and the handling of state funerals.

Yesterday in Parliament, the Majority of the House, asked the Minority to offer the Finance Minister, Mr Ofori-Atta an opportunity to be heard on allegations levelled as the basis for a vote of censure against him.

The Minority filed a motion of censure against the Finance Minister over claims of conflict of interest and fiscal recklessness leading to the current economic hardship.

The Speaker of Parliament, Alban Bagbin, in his ruling on an objection against the vote of censure, described the motion as appropriately laid.

But speaking on the floor of Parliament, the Deputy Majority Leader, Alexander Afenyo-Markin, raised some other concerns pertaining to the motion.

“The Minister is entitled to be heard. You cannot take away the right to fair hearing from a respondent. So Mr. Speaker, my view is that, we have a serious matter as censure and the applicants have not served the Minister neither have they served the basis on which they mounted their application.”

The Minority Leader, Haruna Iddrisu, said the Speaker’s ruling must be upheld.

“The Speaker has ruled, and we must show respect to the Speaker. If there are any disagreements with the ruling, they know what to do. Ordinarily, any civilized democracy in the world, you don’t even need a motion for the Minister of Finance to go home. He, upon self-appraisal of where he has led the country and economy to, in all conscience, will bow out and save the nation. So, we have brought a competent motion.”

“The issue of censure motion has already been discussed. These issues were raised, and the Speaker ruled that the motion was appropriate, so I think that we will patiently wait as the motion matures.”

The grounds the Minority cites for the vote of censure are the:

 Despicable conflict of Interest ensuring that he directly benefits from Ghana’s economic woes as his companies receive commissions and other unethical contractual advantages, particularly from Ghana’s debt overhang.

 Unconstitutional withdrawals from the Consolidated Fund in blatant contravention of Article 178 of the 1992 Constitution, supposedly for the construction of the President’s Cathedral:

 Illegal payment of oil revenues into offshore accounts, in flagrant violation of Article 176 of the 1992 Constitution:

 Deliberate and dishonest misreporting of economic data to Parliament 5. Fiscal recklessness leading to the crash of the Ghana Cedi which is currently the worst-performing currency in the world:

 Alarming incompetence and frightening ineptitude, resulting in the collapse of the Ghanaian economy and an excruciating cost of living crisis;

 Gross mismanagement of the Ghanaian economy which as occasioned untold and unprecedented hardship.

Previous EVEN IN OUR CRISIS, GHANAIANS STILL SUPPORT THE NPP
Next Games at NDC headquarters as thugs raid office holding financial details