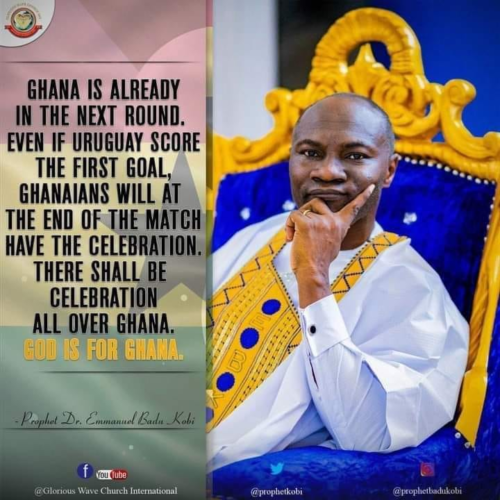 Prophet Badu Kobi who is noted for his prophecies in a video that has gone viral claimed the Blacks Stars will qualify to the round of sixteen in the competition even if Suarez Uruguay scores first.

He maintained that the Black Stars will equalise and qualify.

“Ghana is already in the next round. Even if Uruguay scores the first goal, Ghanaians will at the end of the match have the celebration. There shall be celebration all over Ghana. God is for Ghana”, he prophesied.

But the situation was different when the Black Stars who has pledged to revenge happenings of 2010, were defeated by two goals to nil despite having being awarded a penalty in the first half which Andre Dede Ayew failed to convert.

The Man of God has since been at the centre of trolls by social media users who accused him of overeating for which reason he made such a fallacious prophecy.