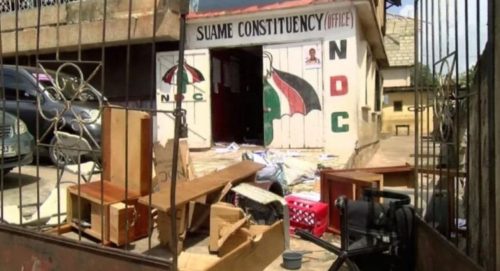 Aggressive members of the opposition National Democratic Congress (NDC) in Suame Constuency of the Ashanti Region have vandalised the party office.

The reactions of the angry members follow their agitation over alleged ghost names inserted in the constituency album.

The party office was visibly in a mess as items such as stationery and other equipment were destroyed during the raid.

According to reports the members claimed they had been delisted from the electoral roll and replaced with unknown faces. 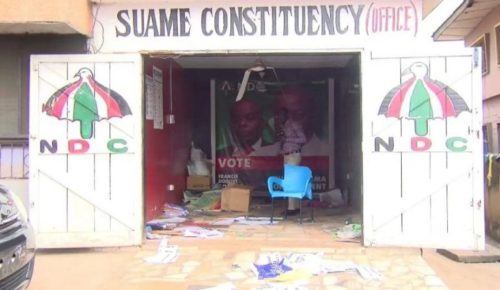 The reports said the register of at least 21 branches of the party in the constituency has been compromised.

However, some of the members who spoke about the issue from various branches turned their anger on top executives within the party accusing them of failing to address their concerns despite several petitions to their offices.

A Branch Executive, Suraj Mohammed speaking on the issue said “We realized that some of the names have been expunged. We called our regional chairman last Sunday and he met the Regional Elections Committee”.

According to him “The briefing suggested that the committee was relying on a new list and we believe the register had been compromised”.

“When we pointed this out to the committee they told us they were waiting for an “order from above”, he explained.

The elections come off this weekend at the various constituencies.

This means the party hierarchy will have to race against time to deal with these vexing matters ahead of the polls.

“We are expected to vote on Saturday (22 October). And so if you tell me you are awaiting a call from above then it means I will be disenfranchised.

“If the party wants peace they should take steps to resolve this issue or else they will face our wrath”, one of the members warned.