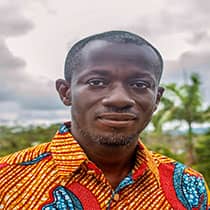 The gallant, selfless and dedicated Farmer’s who have worked tirelessly for motherland Ghana is a great day set aside to celebrate and honour the heroes farmers of the country.

At a joyous celebration to marked the Wassa East Municipal Assembly farmers day celebration at Fameye village a suburb of western region at the Wassa Amenfi East municipality.

Speaking at annual ceremony, the Wassa Amenfi East Municipal Assembly MCE, Hon. Frederick Korankye, was very glad to celebrate a historic farmers day because when the whole world was going through a lot of crisis it was farmers who helped us to survive and also the UN’s dream to irradicate hunger from the world by 2030 can be achieved by this gallant farmers with their hardworking and dedication for service to the nation.

He was optimistic that under planting for food and jobs flagship program which was implemented by H.E.Nana Addo Dankwa the visionary leader who has the youth and farmers at heart, the Assembly has also supplied 11,000 coconut seedlings to 110 farmers to sustain farming when the Cocoa season is over and also, the Assembly has supplied 4,000 palm seedlings for 16 farmers to also support farming.

According to him, the ministry of Agriculture brought 25 bags of rice of which 1 bag contains 40kilos to be distributed among 21 farmers to promote rice farming as well and 10bags of maize containing 45kilos were distributed to 39 farmers and it has also been fruitful.

See also  Breasfeeding does not cause sagging - Dr Benin

For his part, the Member of Parliament for Wassa Amenfi East, Hon. Nicholas Amankwaah a.k.a(Home boy) mentioned that, it’s his wish to collaborate with businessmen in Wassa to help in the development of the constituency.

He reiterated that, there is high cost of food inflation in the cities but due to the hard work of the farmers at Wassa they don’t experience such difficulties.

Again, he promised to construct the roads in the community in other to help farmers to transport foods from their farms to the city.

In his remarks, Mr. Augustine Kyei won the overall best farmer of the year at Wassa Amenfi East Municipal Assembly, he said he was greatful to the Almighty God and the organisers of the program.

He also said that, farming is a lucrative job so the youth should engage in the Agricultural business as well because it would help them.

Meanwhile Mr. Samuel Ofosu Kwaakye who also won the best AI award of the year, he said his parents were farmers so he was born a farmer right from childhood because that was his dream.

He advised the youth to go into agriculture in other to irradicate unemployment in the country.