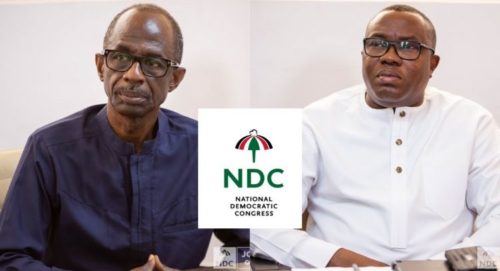 The internal wrangling about the National Chairmanship position of the opposition National Democratic Congress (NDC) is getting out of hand ahead of the upcoming congress as the outgoing General Secretary, Johnson Asiedu Nketiah has alleged that the party’s National Chairman, Samuel Ofosu Ampofo, is anti-Mahama.

Asiedu Nketiah, who is vying for the National Chairmanship position of the party struck when he stated that the autocratic leadership of Chairman Ofosu Ampofo and some aliens in the party who are in bed with the ruling government caused the party to suffer another humiliating defeat in the 2020 Elections because they couldn’t employ competent IT Team to collate the party results.

General Mosquito since announcing his candidature for the position of National Chairman of the NDC, has waged a relentless campaign against the sitting chairman, Samuel Ofosu Ampofo, who is seeking to be re-elected for a second term in office.

In a leaked audio available to DGN Online, Asiedu Nketiah who was recorded at a party meeting accused Samuel Ofosu Ampofo, of being anti-Mahama because he [Ofosu Ampofo] challenged a directive Mr. Mahama sort to convey to the party leadership ahead of the appointment of a Director of Elections and the Director of Information Technology (IT).

He said “As soon as Julius finished speaking, Ampofo said he considers the submission offense to him and his authority as the leader of the NDC party’’.

He claimed “The position of Ofosu-Ampofo brought about a serious misunderstanding at the meeting.

The meeting thus became a flight between the Mahama faction and the Ofosu Ampofo faction. I Asiedu Nketiah sat down quietly and listened to all that was going on”.

He explained that the proposal was purposely made because the flagbearer should be able to have a say in whom he would like to work with in that regard, adding that the proposal did not go well with the National Chairman, Ofosu Ampofo who at the time expressed his displeasure.

Asiedu Nketiah also alleged that the chairman had also said that he could do as he pleased in his capacity as chair until the flagbearship election is held and John Mahama cannot stop him.
Ofosu Ampofo Refutes Claims

Meanwhile, Ofosu Ampofo in an earlier interaction with journalists in Koforidua, the Eastern Regional capital recently debunked festering propaganda that he is “anti-John Mahama.”

According to Mr. Ofosu Ampofo, no amount of lies and propaganda can mar the exceptional relationship and loyalty to former President John Dramani.

He explains that his relationship with Mahama started in 2002 when he [Ofosu Ampofo] became the national organizer of the NDC.

“I am not anti -John Mahama. I am one person who has worked with John Mahama ever since I became the national Organizer of this party in 2002. We went to an election in 2008 in which the late Prof. Mills won power. At that time I was leading his campaign team when he was a running mate. Ever since I became Regional Minister I worked with him.

I worked with him when I became the local government minister. When I was National Organizer, President Mahama was Director of communication of the party which I worked with him”.

Mr. Ofosu Ampofo said his loyalty to Mr.Mahama is unquestionable, promising full support for him.

“I have been loyal to President Mahama and continue to be loyal to him. And I want to state that if our delegates endorse him or vote for him which I know is a possibility and likely scenario, I will give him my 200% support. I will work for him 24 hours to ensure that he wins the next elections and form the next government to bring policies to rescue this country into reality”

Previous Asunki Writes: NDC seriousness is empty and scary during and after elections, Supreme Court Vindicated.
Next Debt exchange programme not our focus – IMF Chief