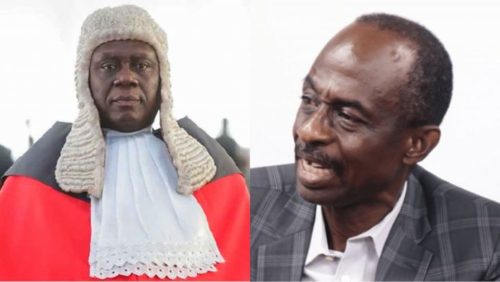 Johnson Asiedu Nketia has shot a salvoe at the Supreme Court over its verdict on the 2020 election petition.

Few days after blaming Samuel Ofosu Ampofo as the cause for the party’s failure in court, he has turned around to castigate the highest court of the land as being the cause of their defeat.

The outgoing General Secretary of the NDC, popularly known as ‘General Mosquito’ thinks the Supreme Court did not apply fairness in its handling of the petition.

Speaking at the party’s National Delegates’ Congress at the Accra Sports Stadium Saturday, December 17, 2022, General Mosquito chastised the apex court of the land, saying they were biased with their call.

The failure of the court to allow Jean Mensa, the Electoral Commission chairperson to testify in court, according to Asiedu Nketia, makes the Supreme Court a bad arbiter of the petition it adjudicated.

“We had a Supreme Court that threw common sense, fact and logic to the wind and denied the people of Ghana the opportunity to hold the Chairperson of the Electoral Commission to account for her stewardship as the sole returning officer for the presidential election,” he stated.

He said even though the NDC were not victorious in the case due to the poor judgement given by the court, Ghanaians who followed the election proceedings and what ensued in court can attest to the facts his outfit adduced to the court.

“We lost the case in court but won in the court of public opinion,” he added.

His comments come just few days after explaining his inability to produce any result in court to challenge the figures of the EC, courtesy a viral audio on social media.

During his campaign in the Bono and Bono East regions, he told delegates prior to the Congress the conflict that revolved around the appointment of one Osei Kwame Griffiths as Director of IT for the NDC.

He explained in the audio that, the IT Director their chairman appointed was a confidante of Vice President Mahamudu Bawumia, according his sources, making him the wrong person for the job. But Mr. Ofosu Ampofo did not agree to their objections.

He said the system Mr. Griffiths presented was so poor that it couldn’t collate the results halfway beyond the process.

For this reason, the NDC went to court without evidence due to the poor stewardship of Mr. Ofosu Ampofo.

Meanwhile, he is now saying they had a good case with evidence but were outwitted by the Supreme Court.