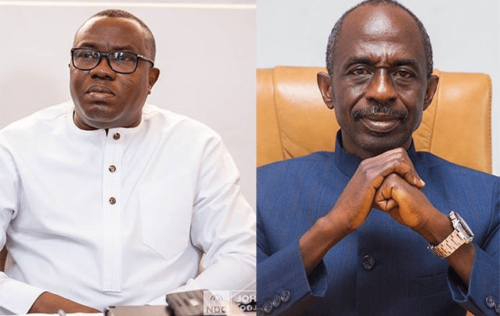 The Ashanti Regional Executives of the National Democratic Congress (NDC) are at each other’s throats as their loyalty splits for leading contenders in the National Chairmanship race.

Nana Kwasi and some other constituency chairpersons declared support for Samuel Ofosu-Ampofo to contest the post for the second time; this was at a press conference on Monday at the party’s regional headquarters.

MyNewsGh.com has learnt several unguided incidents have occurred within the NDC in the Ashanti region in recent times that is affecting the fortunes in the region ahead of its National Delegates Conference.

The regional offices were locked when the General Secretary Asiedu Nketia was to meet some executives and selected party officials, as the Party Chairman and his team did not welcome him to the region.

However the same executives welcomed Ofosu Ampofo with open arms when he came to the region to campaign.

This has angered the Jabari-led team within the NDC who are unhappy this is happening to an individual who has served the party very well for more than three decades.

The happenings has forced party’s Regional Secretary Dr. Frank Amoakohene to put out a disclaimer on situations in the region that lead to the executives unable to meet Asiedu Nketia, describing the speculations as false and unfounded.

He is urging calm in the NDC as the contest happening in the party is a family engagement adding that members must desist from smear campaigns.

The Ashanti NDC appears divided and wounded ahead of its National delegates Conference this weekend in Accra , a situation political watchers believe if not handled well could affect the fortunes of the party in the region ahead of the 2024 general elections.

The attention of the Ashanti Regional Secretariat has been drawn to a video making rounds on various social media platforms to the effect that Ashanti regional executives refused to meet with Asiedu Nketia, the General Secretary of NDC.

This claim is a palpable falsehood and must be treated with utmost contempt.

1. The regional executive committee (REC) by a circular dated 22nd November, 2022 requested a meeting with all National Aspirants who make entry into the Ashanti Region for their campaign tour.

This was necessary to effectively coordinate their activities and to prevent any possible clashes between supporters of aspirants.

2. All aspirants who have so far visited the region have held very successful meetings with the REC and have conducted peaceful and decent campaign activities within the region.

3. General notified the REC of his entry into the region and scheduled to meet with the REC on Monday 4th December, 2022 at 6pm.

The General did not appear and we had no word until 9:11pm when we were informed that he cannot make it for the meeting.

To our surprise, he was rather at Anita Hotel at Ejisu where he met a section of the regional executives.

4. The General started his campaign with no communication with the REC until Wednesday 7th December, 2022 when he requested to meet us on Friday 9th December 2022 at 8am.

5. The Regional Chairman had earlier communicated to the REC that he would be away for the funeral of the father of the former MCE of Drobonso and was out of town.

See also  Petrol, diesel prices to go up marginally from May 1; LPG to drop by 2%.

6. On the morning of the meeting day, the Regional Secretary and 6 other regional executives were present at the office by 7:46am for the meeting. THERE WAS NO COMMUNICATION from the General or his assistants until he finally appeared at 10:38am.

7. Eight Regional Executives were present to meet the General including the regional vice chairman who is making those wild allegations.

8. The General and his team called off the meeting with the excuse that the Chairman was not present and that they could not meet the other executives in the absence of the Chairman.

9. We wish to state emphatically that the REC is ever ready to meet with the General anytime he makes time for the same.

10. We wish to remind all individuals who are engaging in acrimonious/smear campaigns that we are one family under one big umbrella.