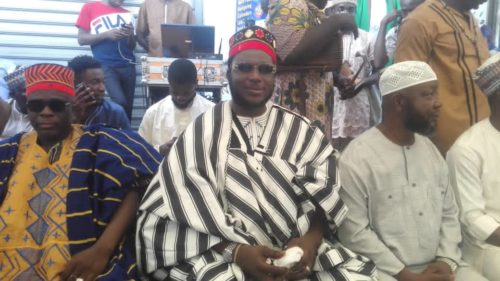 At a joyous celebration to marked the 27years on throne of the Alhaji Is-Hak Suleman (Naaba Sigirie I) the head of Moshie community in Greater Accra Region and coronation of some chief into office.

Speaking at the sideline of the coronation, Emir Abubakar Iddris Jordan(Saaki Ciessawa Ghana) who was also crowned as the Defence Minister as Passipanga Naaba observed that there are a lot of changes confronting the Zongo community which needs urgent attention to address.

According to him, been a businessman and a philanthropy he has established a foundation which Carter for education needs of the teaming youth in the Zongo community.

He appealed to government to arrest and prosecute the perpetrators who brought the children from Niger and Mali to come work on our streets.

He was optimistic that in a collective efforts by both the Zongo Development Authority and the chief’s of Zongo communities Ghana can do away with child trafficking and abuse.

According to him, the way and manner the zongos held their functions on the streets is a bit worrying and by so doing he has spoken with the Zongo Development Authority to find a piece of land for the establishment of the Zongo community centre.

See also  GROW WHAT YOU EAT CAMPAIGN LAUCHED IN CAPE-COAST

He encouraged the youth of Zongo communities to find some skills training than been used to cause mayhem by some selfish individuals who doesn’t think the welfare of the youth.

Previous VIDEO: Check out the poor state of dining tables of Pope John SHS
Next All sacked from venue after confusion at NDC Youth congress