Although my father overthrew Nkrumah, he still deserves some praise – Jackie Ankrah 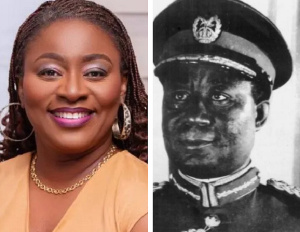 Jackie Ankrah, daughter of Lieutenant General J. A. Ankrah, said although her father overthrew the Nkrumah government, he still did a lot of things worth celebrating.

“We don’t talk about my father much which is unfortunate because of the Nkrumah overthrow. My father was the first in many things, but my father was an amazing, remarkable, incredible soldier.

“Just recently, he was honoured at the Ghana Armed Forces Command and Staff College, and when they wrote and spoke about him, I was proud because my father has done so many things that we don’t get told about because we rewrite history all the time. But I think these are things that we must talk about to encourage one another and encourage the next generation,” she told Naa Ashorkor.

Jackie also established that her father was a great inspiration to the new generation adding that he should be added to the crop of past leaders usually recognized in the country.

Joseph A Ankrah was the chairman of the National Liberation Council from 1966 to 1969 and was Ghana’s first military head of state after he overthrew Dr Kwame Nkrumah alongside other members of the NLC.

He died in 1992 and left behind several wives and 18 children.