All sacked from venue after confusion at NDC Youth congress 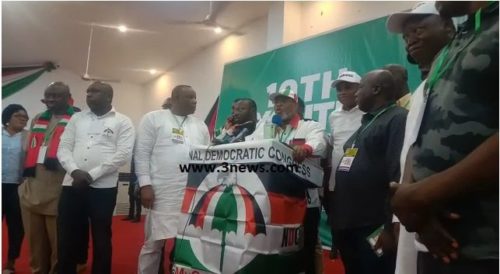 All persons in the auditorium where voting was scheduled to be held for the National Democratic Congress (NDC) Youth and Women Conference have been driven out.

They were driven out following confusion over the album for the Conference.

The confusion stalled the process for hours.

Chairman of the party’s elections committee Alex Segbefia asked all to walk out of the auditorium after a crunch meeting with the two candidates for the National Youth Organiser position.

See also  You've seen nothing yet from Mosquito, I warned you before – Koku Anyidoho reacts to Minority leadership reshuffle

“There are too many people in this hall who are not delegates,” he announced in the public address system provided.

Incumbent George Opare Addo and Brogya Genfi, a former Ashanti Region Youth Organiser, are slugging it out for the position.

But concerns were raised about a list, for which leadership met the two aspirants.

The Conference is being held at the University of Cape Coast in the Central Region, seven days clear of the national delegates’ congress to be held in Accra.

Tags All sacked from venue after confusion at NDC Youth congress