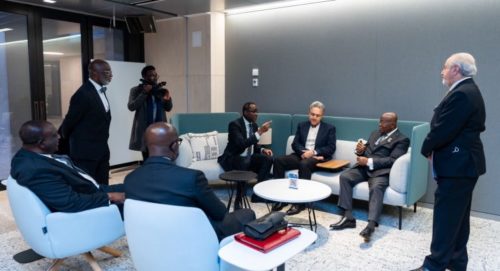 He has lobbied for intensive investment in the agricultural sector as part of major plans to economically empower the African continent.

Mr. Kyerematen advocates for this during the recent summit of US- African leaders in Washington DC from December 13-15, 2022.

The U.S.-Africa Leaders’ Summit was anchored on the shared values of fostering new economic engagement; reinforcing the U.S.-Africa commitment to democracy and human rights; mitigating the impact of COVID-19 and future pandemics.

African Trade Ministers used the opportunity to stage a round table discussion with US Members of Congress and other high-ranking officials led by Ambassador Katherine Tai, the US Trade Representative.

They also used the platform to discuss continental matters with emphasis on the industrialization agenda as exposed by recent external shocks that threaten to ground most economies in Africa.

Speaking on behalf of the US Government, Ambassador Tai highlighted the importance of the U.S.– Africa economic relationship in addressing current financial challenges and building a more resilient, sustainable, and inclusive future. Ambassador Tai reiterated the need for the two sides to work together to fulfill AGOA’s promise boosting the productive capacity of the continent and to pursue equitable growth for all segments of both societies.

Central among the many areas discussed was the extension of the African Growth and Opportunity Act (AGOA) which is set to expire in September 2025.

Speaking at the roundtable discussion, Mr. Kyerematen called for the need for enhanced US investment in selected strategic sectors such as Agriculture and Agribusiness, oil and gas, blue ocean economy and investment in light manufacturing industries, support for the development of infrastructure including roads, rail, port infrastructure and renewable energy.

The longest serving Trade and Industry Minister in Ghana, urged African leaders and the United States to identify key areas whose transformation will be felt by the average African amidst the global economic meltdown.

Later, the minister also joined President Akufo-Addo to attend a series of high-profile meetings and events including the meetings with the Managing Director of International Monetary Fund (IMF) and the President of the World Bank Group.