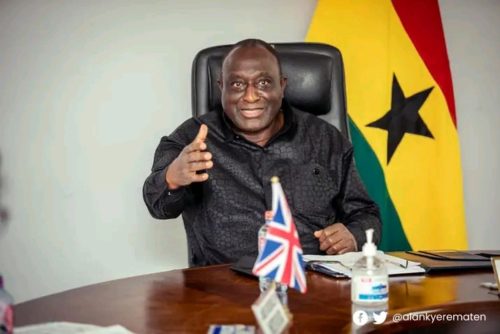 A leading member of the New Patriotic Party (NPP) in the United State of America (USA), Mr Owusu Afriyie has contributed on the ongoing commentary circulating in the party on who leads the party ahead of the 2024 elections.

In his views, many factors have resulted in our current situation which might be our way of believing in theory and expression of grammar.

He said, the NPP’s position now needs a leader who has no question marks, thinking the new Africa direction, marketable to Ghana and beyond, a vision for a plan to attract large numbers of investors from around the world, impacting positively on the economy and many more.

Mr Owusu said, Mr. Alan Kyeremateng is the right candidate among all names that has such qualities adding that, Ghanaian’s can’t ask any questions on his integrity, personality and performance.

He noted that, Africa’s new direction is to industrialize its economy which stands the vision of the trade minister’s 1District 1Factory (1D1F), assembling of automobiles in Ghana and many more.

He said, the party should consider its traditional constitution and elect Alan to break the 8.

Accepts accountability for the negative impacts of the policies that he has supported in the past, and aligns himself with pro-worker advocates who will continue to keep him accountable and push Ghana forward”, he added

Previous New Zealand bans cigarettes for future generations
Next Bawumia to face Mahama is a risk for NPP, NDC will ask questions on his own words we can’t answer – Leading Member, (NPP-USA)