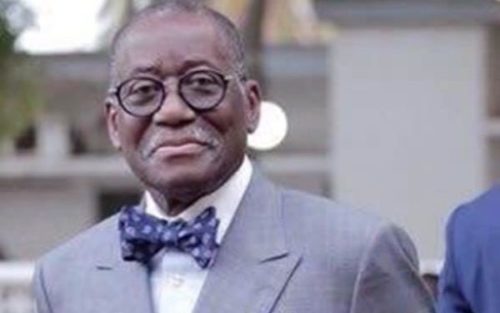 Edward Akufo-Addo, alias “Bumpty” younger brother of the President, Nana Akufo-Addo, has told an Accra High Court that he has been using Ghana’s Presidential Jet by virtue of the fact that his brother is the President of Ghana.

Grilled under cross-examination by Lawyer Victor Kojogah Adawudu, the businessman confirmed using the presidential jet ‘two or three times’ but only in the presence of the president.

Mr Akufo-Addo, is in court after suing Class Media Group, the Executive Director of the Alliance for Social Equity and Public Accountability (ASEPA), Mensah Thompson, and others for defamation.

Interestingly, “Bumpty”, denied vehemently using the country’s executive jet in his suit, insisting that the claim by the defendant was “utterly false and a product of the defendant’s imagination.”

Lawyer Adawudu, who is representing the Executive Director of ASEPA, Mensah Thompson, who is accused of falsely claiming on the Accra-based Class FM, that Mr Akufo-Addo, travelled to Abuja – Nigeria for his personal business using the presidential jet.

Edward Akufo-Addo, is demanding among other reliefs that the court orders Thompson to pay ¢10 million as damages.

The brother of the president, on October 31, opened his case and informed the court of his decision to rely on his six-page witness statement.

Here is a portion of the transcript of what transpired in court between Lawyer Victor Adawudu and Edward Akufo-Addo:

Question: Have you ever boarded the Presidential Jet?

Answer: Yes My Lord. 2 or 3 times with the President and once with the 1st Lady.

Answer: I believe to Kumasi and with the 1st Lady, returning from Kumasi.

Question: Is it your case that the 2 consecutive flights that you had with the President was from Accra to Kumasi and back?

Answer: Yes, to the best of my recollection.

The President’s brother explained that he boarded the jet because the President asked him to accompany him.

Question: Is having the privilege of using the Presidential Jet with your brother, His Excellency, in what capacity did you board the jet?

Answer: He asked me to accompany him.

Question: In other words, you did not go with him as a public official. Not so?

Answer: That is so, I am not a public official.

Question: And the privilege extended to you by the President was because you are his family. Not so?

Answer: That is so. I am his brother.”

He was then questioned on how much he paid each time he boarded the Jet. Mr Akufo-Addo replied that he did not pay anything.

Answer: I didn’t pay anything. The President did not ask me to pay.

Question: Putting it to you that the courtesies that you enjoyed without paying were borne by government machinery from public funds.

Answer: I am sure the flight was paid for from public funds, I do not think my joining the flight incurred any additional costs. My brother was going there in any event”, he answered.

The ASEPA Executive Director alleged on the media outlet that Edward Akufo-Addo had used the presidential jet for a private trip to Abuja.

In his suit, he described the claims as “utterly false and a product of the defendant’s imagination.”

It is not the only time Thompson has made such allegations; he is on record to have claimed that relatives of the president used the jet for a shopping trip to the United Kingdom.

He was arrested for the publication of fake news after the military denied that the jet had been used for the said trip. He later apologized for the claim stating that his source had misled him.

Other reliefs being sought:

Aside from the GHc10 million cedis in damages, Edward is seeking other reliefs from the court, among others:

“An apology and retraction of the words complained of particularly in paragraph 9 of the Statement of Claim with the same prominence as the impugned publication”.

And a perpetual injunction restraining the defendants, whether by themselves, their servants, agents or assigns, from repeating the same or other, similar words of and concerning the plaintiff.

Lastly, he is asking for costs inclusive of legal fees.