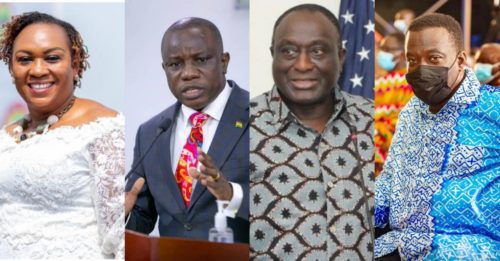 Reports near the seat of government have intimated to MyNewsGh.com about imminent changes in the Akufo-Addo-Bawumia administration to appease the ruling New Patriotic Party (NPP) base.

President Akufo-Addo has come under serious pressure within and outside his government and party to reshuffle some non-performing ministers and other appointees and to rotate the “dinning seats” for new faces to come to the table.

There is a believe that if there is a reshuffle, things will turn around for the current government.

Insiders say the most obvious ministers to be affected are the ministers who have announced Presidential plans such as John Alan Kwadwo Kyerematen, Minister of Trade and Dr. Owusu Afriyie Akoto, Minister of Agriculture who will not be returned.

Minister Of Foreign Affairs And Regional Integration, Shirley Ayorkor Botchwey; Attorney General And Minister For Justice, Godfred Dame, Minister Of National Security, Albert Kan Dapaah and Minister Of Defence Hon. Dominic Nitiwul are said to be assured of keeping their jobs in the New Year Reshuffle.

The President is also expected to merge some ministries into one as part of a cost-cutting measure to save the public purse some Ghs158million in the 2023 fiscal year.

Mavis Hawa Koomson who was promoted from the Special Development Initiatives Ministry to the Fisheries sector could also be affected, the source added.

A new face is also expected to replace Minister of Employment and Labour Relations, Ignatius Baffuor Awuah, who the source says will be reassigned from the labour front where the government expects high pressure in 2023 going into 2024.

While many people including 90 NPP MPs expect President Akufo-Addo to also name a new Finance Minister to replace Ken Ofori-Atta, the source said “the President will not touch Mr. Ofori-Atta for now” until after the entire IMF program is concluded”

“Already the President has been impressed with the record time negotiation of the staff agreement by Ofori-Atta and his team and by April 2023, the entire deal should be settled”.

There is intense lobbying happening over who get to keep their job and who will be sacked or reassigned as the NPP is set to announce a road map for parliamentary and Presidential primaries next year.

The source said the list is not finalized and could be subject to change right to the very minute of announcement.

Other reports from Jubilee House suggest the President and government is displeased by recent remarks made by party General Secretary, Justin Frimpong Kodua that seeks to pre-empt the impending reshuffle.

Mr. Kodua at a party forum days ago disclosed that the party is undertaking an assessment of all Akufo-Addo’s appointees, after which it will “force” the President to reshuffle the non-performing ones.

“The NPP worked so hard in 2016 for us to win the elections and, therefore, will also work so hard to win in 2024. But at this point, if ministers, CEOs (Chief Executive Officers), or MCEs (Municipal Chief Executives) are not reshuffled for poor performance, we will reshuffle them ourselves…. the national party, I must tell you on our own, is doing an evaluation assessment of government appointees. And once we are done with the assessment evaluation, we shall discuss it with His Excellency, the President.” JFK said.

The imminent reshuffle ahead of the President’s New Year Message shows Akufo-Addo is bowing to pressure.

In August, President Nana Addo Dankwa Akufo-Addo observed that people who are calling for reshuffle have an agenda and said the calls mostly come from members of the opposition National Democratic Congress (NDC) who want to destabilize his government.

He also believed that some members of the NPP who need jobs are behind these calls and he will not fall for it.

“The calls come for all kinds of reasons; NDC wanting to destabilise the government is one. There are people who are also looking for jobs.”

The President was speaking on Tamale-based North Star radio rained praises on his Ministers indicating that they are doing well.

President Akufo-Addo said “many of them for me have done outstanding work. Their output has been considerable, and that is what I look at.”

“If the output measures expectations, then I don’t have any strong reasons to heed the call,” President Akufo-Addo added.

Previous C/R: Hunter shoots palm wine tapper after mistaking him for a deer
Next C/R: Man butchered over alleged ownership of child at Assin Anwiasu