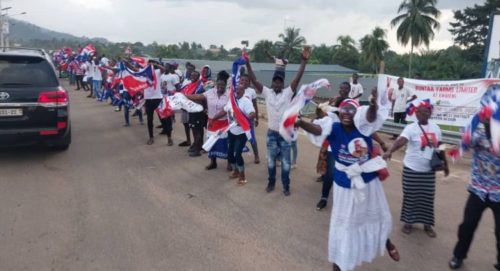 Hundreds of Residents living along the Accra to Kumasi Highway in the Eastern Region on Saturday mobbed President Akufo-Addo’s convoy while on his way from Nsawam to Abomosu in the Eastern region.

The President received a rapturous welcome on his second day of the 3-day tour of the Region.

The residents mostly supporters of the ruling New Patriotic Party lined up on the Highway from Nsawam Overpass, Suhum, Apedwa Junction, Bunso, Anyinam, and Kwabeng to welcome the President.

The residents clad in their party colours amid a mammoth crowd waved at the convoy and cheered the President on.

The President on his second-day tour of the Region commissioned the Nsawam Prison Camp built by the Church of Pentecost, a dormitory block at St Martin, and a factory at Nsawam under the 1D1F Project.

He thereafter stormed the Atiwa West Constituency, where he inspected some projects, commissioned a bridge, commissioned the STEM Senior High School at Abomsu.

The President will end the tour on Sunday in Koforidua, the Regional Capital.

Previous “1D1F: 17 Completed; 16 Under Construction In The Eastern Region” – Akufo-Addo
Next My heart bleeds – Samini chastises Akufo-Addo over hard times