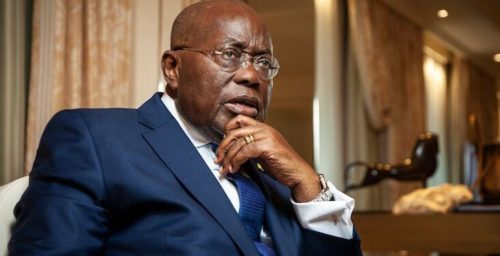 The Herald’s insiders at a meeting summoned by the President, Nana Akufo-Addo with Civil Society Organization (CSO) leaders ended on a disappointing note, as the seat of business drove journalists from the room, in order not to have their concerns captured and relayed to the public.

The meeting was held behind closed doors in the banquet hall of the Jubilee House – Accra on Friday November 4, 2022.

This happened immediately after the President, had finished talking, and feared that the leadership of the CSOs, were going to go ballistic on the performance of the economy judging from the mood in the room.

Some of their colleagues, had refused to participate in another meeting called by the President, because previous meetings with him, had them feeling insulted by him.

But this time, the insult was even more as President Akufo-Addo, disappointingly, asked the media to leave the room before the CSOs spoke, hence none of their concerns and daily frustrations with the economic situation and bad governance was captured by the media.

The meeting was subsequently held in camera at the presidency with some thirteen active CSOs in the country participating in the session.

The same situation happened with other meetings held during the day with groups such as the Ghana Bar Association (GBA).

Insiders disclosed that the CSO leaders, who attended the meeting, were not enthused by previous engagements that yielded no result.

Some within the CSO space feel that the President has only been successful in swapping out the bankruptcy status of himself and many of his family members with the riches of the country.

For this reason the likes of Franklin Cudjoe, Bright Simons, Kofi Bentil all of IMANI Africa were absent, Ace Annan Ankomah and Sidney Casely-Hayford of OccupyGhana were also absent.

Another person who also stayed away from the meeting with the President was Ben Boakye of the African Centre for Energy Policy (ACEP).

Ahead of the meeting, Dr Steve Manteaw, who is one of the usual suspects on previous visits, took to his Facebook wall and wrote: “The President is meeting the leadership of CSOs today. My view: A complete waste of time. None of the suggestions from previous encounters has been implemented.”

Dr Manteaw, was proven right as the meeting, had the President as the only person whose voice was captured by the Presidential Press Corps.

The media cameras shortly after his opening remarks and camera-worthy niceties, were not allowed to capture the views of the CSOs.

This paper’s Jubilee House sources, indicate how disappointed the President felt with the absence of the usual suspect of CSO leaders who participated in previous meetings with him.

Insiders hinted that President Akufo-Addo, was counting on the meeting with the CSOs and other organized groups he met in the day to woo their support and discourage participation in last Saturday’s Kume preko demonstration. However, most of the big shots in the CSOs fraternity, ignored the president’s invitation.

Earlier in the week, a Jubilee House source had indicated to The Herald that, the state security brief presented to the President, had suggested to him that the planned demonstration could shake the city, if nothing was done to discourage participation.

Therefore, the President saw the urgent need to engage the CSOs and pretend to be listening to their concerns, while subtly dousing their energy to participate in the Kumi preko demonstration being organised by a private legal practitioner, Martin Kpebu.

Before President Akufo-Addo delivered his “crisis” speech last Sunday, he engaged stakeholders without the CSOs.

While the CSOs, were not relevant for his engagement before his speech, he later saw them as a tool for cleaning his mis-governance and preventing public outrage against the terrible economic situation he, his cousin Ken Ofori-Atta and Dr Mahamudu Bawumia, have visited on citizens.

The Herald, has made an effort to contact some of the CSO leaders to find out why they boycotted the President’s invitation, but some declined to comment, and others heaved a sigh in disappointment.

Other media outlets are reporting that President Akufo-Addo’s talks with the CSOs was about the economic challenges the nation is currently experiencing and to aggregate their thoughts on steps being taken to restore stability and growth.

In his introductory remarks before the meeting moved into an in-camera session, President Akufo-Addo, indicated that he invited the CSOs to get their inputs as an important constituency in the governance process, on steps his administration is taking to resolve the current economic crisis.

“All of us are aware of the difficulties that our economy finds itself in and the efforts that are being made by this government to address these difficulties.

“I don’t think that that effort will succeed unless it is guided and influenced by a broad a consultative process as possible” President Akufo-Addo said.

“It will be difficult after you meet the economic operators, private sector people [not to meet] those of you [CSOs] who are guarding the morality and public governance of our country” Akufo-Addo added.

Jubilee House sources who are familiar with the details of the meeting point out to journalists that the CSOs were briefed by the Finance Minister, Ken Ofori-Atta, on the ongoing International Monetary Fund (IMF) negotiations, budget 2023 and other economic management related issues.

Other Ministers present at the meeting were also allowed by the President to brief the CSOs on steps being taken to restore confidence in the country’s economy.

The CSOs also shared their thoughts and suggestions with President Akufo-Addo and his team on pertinent economic indicators and what they believe is the way forward with regard to rapid steps that needs to be taken to arrest the depreciation of the cedi, rising cost of living, among others.