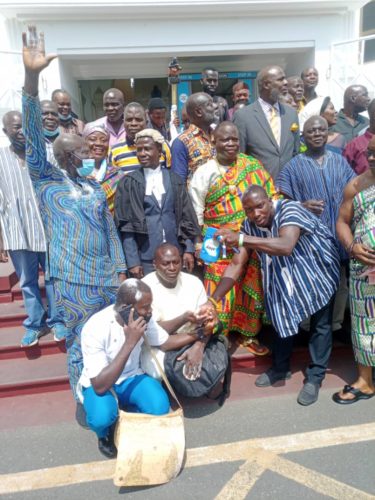 The much-awaited judgement on the case involving Togbe Gamor Saho VII, Mama Alorvi II and Rev. Wilfred M.K Glover in the matter of an order of perpetual injunction placed on them in respect of the burial and final funeral rites of the Late Togbe Kofi Saho VI of AKATA CLAN burial at the instance of one William Kwame Doko (the purported Togbe Saho) was delivered on Tuesday, December 13, 2022.

In what can best be described as a landmark ruling, the Supreme Court of Ghana ruled in favour of the Applicants Togbe Gamor Saho VII, Mama Alorvi II ( Dorfor-Agorveme Queen Mother) and Rev. Wilfred M.K Glover (Glover / Seledzi family head), all of Dorfor State.

In the ruling, the Supreme Court of Ghana presided over by Her Ladyship Justice Mariama Owusu and concurred with all the four other Justices Gertrude Torkornoo, Avril Lovelace Johnson, Amadu Tanko and Yohni Kulendi.

She lacked the jurisdiction and committed grievous errors of law when she, among others, granted William Kwame Doko the reliefs, which invariably recognized him as Togbe Saho VI, thereby stalling the intended funeral of the deceased Togbe Kofi Saho VI.

The Apex Court, on all the grounds raised by Counsel for the Applicants, issued an order of certiorari to quash the decision, orders etc contained in the said ruling of the High Court dated 21st October 2022 in its entirety. The Supreme Court further awarded a sum of thirty thousand Ghana Cedis (Ghs 30,000) in favour of the Applicants against the interested Party, the self-acclaimed Togbe Saho.

As a background to the case, the Applicants, Togbe Gamor Saho VII, Mama Alorvi II and Rev. Wilfred M.K Glover through their lawyer, David K. Ametefe, ESQ., filed a motion on notice before the High Court, Ho dated March 4, 2022, Wherein they sought to set aside the writ of summoning and service of the writ because the writ was not properly served and that the High Court in Ho lacked the jurisdiction to try the action commenced by William Doko which action was purely a cause or matter affecting chieftaincy, but was disguised as an ordinary civil action. The High Court was only called upon to determine whether the writ was adequately served and whether the case was a chieftaincy matter. The High Court Judge in deciding this simple application went ahead and granted Plaintiff William Doko (aka Togbe Saho) all the reliefs he was seeking from the court, without any trial or evidence. It was this decision that was challenged at the Supreme Court.

Counsel for the Applicants argued the motion before the Supreme Court on the following grounds:

That the Learned Trial Judge breached the rules of natural justice, namely Audi alteram partem rule by denying the 2nd & 3rd Applicants herein the right to be heard when upon the Court’s own finding that the 2nd and 3rd Applicants herein had either not been served or improperly served with the Writ of Summons & Statement of Claim in the action, Suit No. E.12/44/2022, and yet proceeding to determine the substantive matter.

The High Court, Ho presided over by Her Ladyship Justice Charity A. Asem (Mrs.) acted without jurisdiction when she proceeded against the 2nd and 3rd Applicants herein who upon her finding, had not been served with the Writ of Summons and Statement of Claim.

That the Learned Trial Judge herein denied the Applicants herein the right to be heard in breach of the rules of natural justice, namely the audi alteram pertem rule, when she proceeded to determine the entire suit in favour of the interested party which was not the matter before her.

That the Learned Trial Judge herein committed a grievous error of law apparent on the face of the record, which error also goes to jurisdiction to determine declaratory reliefs in the substantive matter in Plaintiff’s favour without any trial, hearing or argument.

See also  One Shot Dead, 4 Others Injured In A Deadly Clash At Ofoase

That the Respondent Judge committed a further error of law apparent on the face of the record which error denied her jurisdiction when on allegation of fraud/ misrepresentation without trial.

The Respondent Judge exhibited apparent bias against the Applicants particularly the 1st Applicant and in favour of the Plaintiff (Interested Party) throughout her ruling.

And the Supreme court of Ghana agrees with the Applicants among other things that the Ho High Court Judge lacked jurisdiction to make the orders so made, and committed serious errors of law.

Now, Togbe Gamor Saho VII, Chief of the Akata Clan, Mama Alorvi II and their Lawful and Rightful King makers urge the youth of the Akata Clan and Dorfor as a whole to remain calm while they celebrate their deserving and long overdue victory. Truly the law of the Republic of Ghana is fully at work if you follow its due processes with perseverance without giving up.

The Leadership also takes this opportunity to thank the one and only Supreme Court of the Republic of Ghana for upholding the rule of law and honouring the substantial justice for the people of Dorfor, Akata Clan to be specific.

However, the leadership also want to appreciate the High Court, Ho presided over by Her Ladyship Justice Charity A. Asem (Mrs.) for the role it also played in this matter to ensure peace.

Togbe Gamor Saho VII and the Rightful and Lawful Kingmakers of Dorfor Akata Clan have vehemently warned Doko Kwame William the purported Togbe Saho VI and his cohorts to desist from any dubious and criminal activities they are involving themselves in even after the Supreme Court verdict. Togbe Gamor Saho VII and his Elders pledge to bring peace and unity to Dorfor – Akata Clan as a whole.

They went further to say that after the Supreme Court verdict that set aside the Ho High Court Ruling in favour of the purported Togbe Saho, he is still using the same Ruling parading himself as a chief by destroying the community farmlands, doing illegal sand-winning at Tsikpe – Dorfor as we speak. As they started winning the sand VRA personnel went to stop them from destroying government properties but still, they didn’t back down from their illegal activities.

Meanwhile, the same purported Togbe Saho and his cohorts were already warned by the Director-General/CID at the National Headquarters of Ghana Police Service in the year March 2019 with a reference number CID/VR. 4/2018/51 to desist from the act or face the full rigours of the law. Yet the purported Saho refused to obey the law. As we speak, he is inciting his Land guards/cohorts to take guns and fight anybody who attempts to stop them from the illegal sand winning.

Togbe Gamor Saho VII and his various family heads of the Clan /Elders again said that they still want to remain the law-abiding citizens of our beloved country Ghana, therefore, without taking matters into their own hands reported the criminal case to the Juapong Police District Command and awaiting appropriate action to be taken by the Commander for this illegality to stop with immediate effect, other than that this will bring serious problem in the area.

They also said that they are talking to their lawyer to start the contempt case against the purported chief and his cohorts for disrespecting a whole Supreme Court Ruling.

In your view is Togbe Gamor Saho VII of the Akata Clan, Zikpuitor Norvinye Kpornorglo the Stool father of the Akata Clan, Mama Alorvi II of Dorfor-Agorveme and Rev. Wilfred M.K Glover together with their King Makers and Principal Elders.