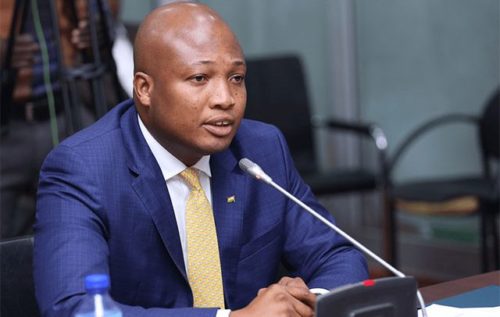 The National Democratic Congress (NDC) Member of Parliament (MP) for North Tongu, Samuel Okudzeto Ablakwa, has dismissed claims that the Chinese galamsey queen, Aisha Huang, is married to a Ghanaian, pressing for more information about speculation by the counsel for the accused person.

Captain (Retired) Nkrabeah Effah-Dartey, who made the claim, said the husband of the accused person came to his office to engage him as a lawyer to defend Aisha Huang, otherwise known as En Huang.

Aisha Huang, is currently standing trial with three other Chinese nationals: Johng Li Hua, Huang Jei and Huaid Hai Hun for mining without a valid licence and engaging in the sale and purchase of minerals without a permit.

According to the lawyer, the unnamed person is a businessman in Kumasi, who holds a master’s degree from a Chinese university.

But the North Tongu MP has rebutted the assertion, saying that this is a “phantom creation” to get the Chinese galamsey queen outwit the law, insisting, “Aisha Huang is not our in-law, and we really don’t care if she is — this sympathy wheeze by her legal team is most ridiculous.”

He urged Ghanaians not to fall for this latest “gobbledygook,” quizzing, her lawyers should tell the nation how many husbands Aisha Huang is married to or when exactly her first “duppy Anthony Fabian” was divorced for the current love of her life, who, according to Nkrabeah Effah Dartey, is a Kumasi-based businessman.

Ablakwa said many Ghanaians did not know that this is not the first time the “notorious Aisha Huang” has claimed to be married to a Ghanaian.

“She first made the claim over a decade ago when she told Ghanaian immigration authorities that she married a Ghanaian called Anthony Fabian at a 2007 wedding in China.

“Interestingly, she then used that to secure an indefinite permit from the Ghana Immigration Service allowing her to travel to Ghana at will without a visa,” he recounted in a post on his social media page.

According to him, it turns out that the said Anthony Fabian was her “clever phantom creation,” adding that “it remains a mystery how she managed to obtain a Ghanaian male passport in the name of a ghostly Anthony Fabian with Passport Number: H2554456.”

“Court documents in my possession from her 2017 and 2018 aborted prosecution and other intercepted official records reveal that the Passport Office and the Foreign Ministry had absolutely no information about any application by Anthony Fabian for a Ghanaian passport. There was also no manual or biometric trace,” the MP noted.

He said curiously, the country’s Birth and Death Registry also has no record of anyone called Anthony Fabian.

“The New York phone number she provided to security operatives was never picked. She could also not provide a valid New York address. Immigration records confirm that no Anthony Fabian has ever used the Kotoka International Airport or any of our approved entry points, he added.

He disclosed that pictures of Aisha’s Anthony Fabian (not the Anthony Fabian who is a British film producer, writer and director) do not appear to exist — not even wedding pictures, intimating that the supposed husband has remained a mystery since 2007.

For the MP, En Huang with her numerous aliases is “unmistakably a modern female version of Al Capone and must be made to suffer severe punishment for her many crimes.”

“Thanks to her and her collaborators, we face an existential threat. I am therefore extremely disappointed in the prosecution that she hasn’t been charged with offences relating to her Anthony Fabian grand criminal enterprise and for illegally obtaining a dubious male Ghanaian passport which she used to mislead immigration officials to entrench her stay in Ghana,” he asserted.