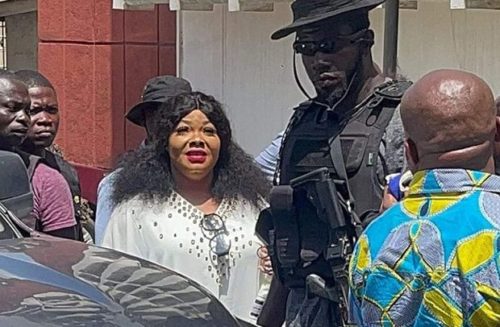 Patricia Asieduaa Oduro, aka Nana Agradaa, the embattled self-styled evangelist charged for defrauding by false pretences is still in the custody of the Ghana Police Service despite an Accra Circuit Court granting her bail.

The repented former fetish priestess was on Monday granted a bail of GH¢150,000 with three sureties, one of whom must be justified with a landed title deed. The court also ordered her to deposit her passport with the Registrar of the court.

She is, however, still in custody as she has not been able to meet the terms and conditions of the bail granted her by the court presided over by Her Honour Evelyn Asamoah last Monday.

A source close to the issue has disclosed to this paper that the justification clause attached to the bail condition is proving to be the hurdle that is still keeping her in police custody for the 15th day since she was arrested by the police.

This paper has also gathered that the police only obtained the bail order yesterday afternoon and were yet to peruse the documents as well as properties to be used by potential sureties before the execution of the bail bond.

This means depending on the speed and ease with which the police are able to ensure all documents are in order, Agradaa could spend an extra day in custody before she is finally let out.

Agradaa is accused of defrauding the complainants in the case by presenting to them that she would double any amount of money they gave her, but failed to fulfil her promise.

The former chief priestess has been charged with one count of charlatanic advertisements and four counts of defrauding by false pretences, to which she pleaded not guilty.

“Investigations also established that accused through the said charlatanic adverts on social media, invited members of the public including complainants to attend all-night service at her church – Heaven Way Champion International Ministry at Weija on October 7, 2022, to have their monies doubled. Complainants and other members of the public came from far and near to attend the said all night service,” the prosecution’s facts said.

They disclosed that Agradaa during the all-night service successfully demanded and received huge sums of monies from some members of the public who attended the said all-night service, including the complainants in the matter, but failed to double it for them.

Agradaa during investigations following her arrest is said to have admitted the allegations made against her by the complainants.