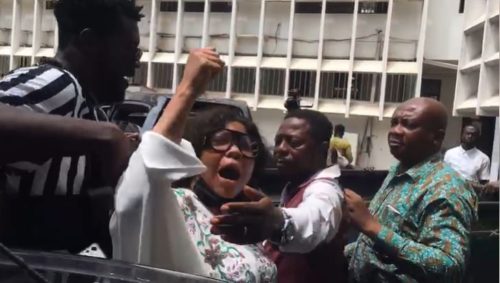 Fetish priestess turned Evangelist, Patricia Asiedua popularly known as Nana Agradaa has been remanded again for the next four days by the Circuit Court in Accra.

This is after the Prosecution asked the Court for more time to do some amendments and also interview all the complainants in the case.

The Court on Monday October 10, remanded her into lawful custody for the next three days.

This was after she pleaded not guilty to charges of Chalatanic advertisement and six counts of defrauding by false pretenses.

The court presided over by His Honour Samuel Bright Acquah after listening to the bail application from her lawyers with Prosecution opposing to same, remanded her.

The court said considering her previous experience with the law regarding ‘sika gari’ and now money doubling, no one knows what she would come up with next.

The Police have arrested Patricia Asiedua alias Nana Agradaa following allegations of a money-doubling scam leveled against her by some members of the public.

The Police in a statement said “Anyone who is a victim of the alleged money doubling scam should report to the Accra Regional Police Command for further action to assist the investigation.”

On Saturday, videos emerged on social media of her victims wailing at the church premises at Weija in Accra after she allegedly swindled them.

Nana Agradaa is said to have earlier promised on TV to give away GH¢300,000 to her congregation with the guarantee of doubling any amount of money an individual offers her.

The news drew a large crowd to the church on Saturday to give various amounts of money with the hope of having it multiplied.

But Nana Agradaa after taking their monies, shut her church doors and absconded after delivering a sermon.

This has prompted the police to arrest her.

Before Nana Agradaa, a fetish priestess turned Pastor converted, she was accused of promising her clients of money doubling.