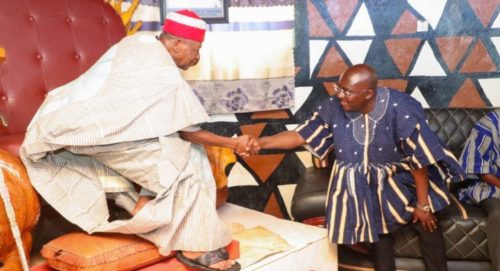 The Paramount Chief of the Paga Traditional Area in the Kassena-Nankana West District of the Upper East Region, Pe Awiah Awumpaga II has lauded government for its Agenda 111 Project.

He noted that the initiative will bring healthcare delivery to the doorstep of the citizenry, which has been one of the major challenges faced by the nation.

The Chief was particularly happy that his Traditional Area is a beneficiary of the innovative initiative by the government of President Nana Addo Dankwa Akufo-Addo, underscoring its significance in saving lives and improving the health needs of residents in the area.

During a courtesy call on him by Vice President Dr. Mahamudu Bawumia as part of his day’s working visit to the Upper East Region, the Chief indicated that the district’s Agenda 111 project had been sited in his jurisdiction, which is one of the ancient towns in the Region.

“I wish to commend the Akufo-Addo government for its vision of bringing healthcare to the doorstep of the citizenry with the Agenda 111. There would not have been a better place to site this project than my area. I am convinced that upon completion, my subjects and I will benefit from it. It would also save us the struggle of travelling to Navrongo and Bolga for certain services once they would be available here for us”, he disclosed.

The objective of the Project is to significantly deepen delivery of quality healthcare at the district level, boost access to healthcare services for all citizens towards ensuring the attainment of the United Nations’ Sustainable Development Goal Three.

See also  ‘I sat up when my child told me she did not ask to be born’ – Former Gender Minister
Agenda 111: Paga Pio hails Akufo-Addo gov’t for bringing healthcare to the doorstep of citizens 2022-10-15
admin
Share