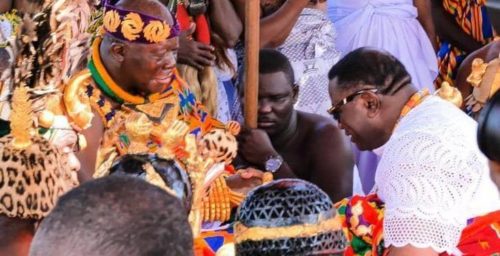 Elvis Afriyie Ankrah, the leading contender for the General Secretary Position in the up-coming National Executives election of the opposition National Democratic Congress (NDC) has made a provident show at this year’s Anlo Hogbetsotso festival, showing gravitas and influence ahead of his campaign launch next week.

Among top dignitaries who graced the colourful traditional event over the weekend, the NDC General Secretary hopeful, was spotted on the dais with prominent Kings of Anlo and their invited guests in his beautiful Kente, sparking conversations about his royal credentials. 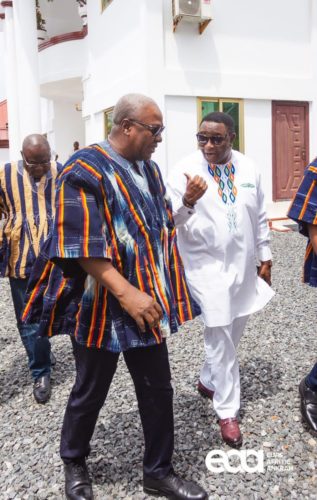 The firebrand former Deputy General Secretary of the main opposition party, was spotted among the Asantehene, Otumfuor Osei Tutu II, the Ga Mantse, King Tackie Teiko Tsuru II, the Kwahumanhene, Daasebre Akuamoah Agyapong II, among other prominent Ghanaians seated together on the dais as the people of Anlo climaxed their month-long Hogbetsotso Festival with a grand durbar on Saturday, November 5, amidst a stunning display of art and culture.

As if orchestrated, Mr Afriyie Ankrah, was at the palace of the Awormefia, Torgbui Sri in the company of NDC’s 2020 Flagbearer, John Dramani Mahama, former Chief of Staff, Julius Debrah, businessman and younger brother of the ex-President, Ibrahim Mahama, during a courtesy call on all the kings of the Anlo Kingdom on the eve of the grand durbar. 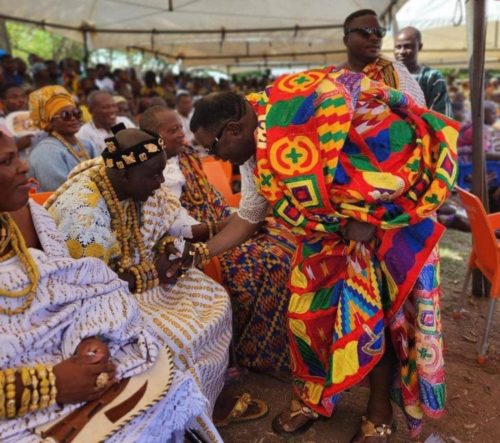 Although, yet to fully unleash his strategy, the ‘Elvis4GS’ campaign has lifted the contest to a new high that poses a threat to his two other contestants, Peter Boamah Otokunor and Fiifi Kwetey respectively, boosting his drive with a cloud of reverence which may become the envy of his battle mates who are struggling to show class as having the clout to lead the administrations department of the party even as the party readies to unseat the NPP. 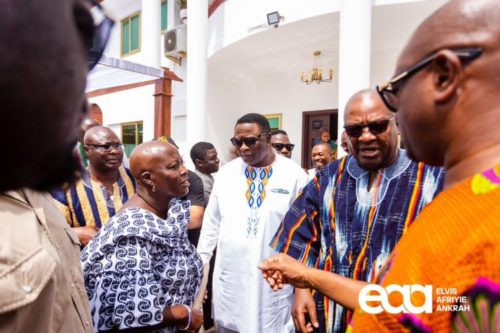 With his maternal mother hailing from the Anlo town of Atiavi, near Keta, in the Volta Region, the former Minister for Youth and Sports, and an ex-Deputy Local Government Minister, seem to be counting on his home support which is critical to clinch a victory in the December contest. He also hails partly from Aheneba Kokoben in the Ashanti region, which may give him an advantage over his colleagues.

His campaign team, has earlier met various NDC groups, including opinion leaders to assure them of his commitment towards a united party after the December 17 congress to face off with the governing NPP bent on rigging the 2024 elections.

Speaking to journalists on the side-lines of the festival of the Anlo state, Mr Afriyie Ankrah, who is currently Director of Elections of the NDC, described the attendance of this year’s Hogbetsotso by prominent kings and queens from other traditional jurisdictions, as very historic and purposeful.

He also designated the presence of the Asantehene and other powerful Chiefs through Awomefia Togbui Sri’s special invitation, as a significant milestone, referencing the history of Asantes, Gas, Kwahus and Anlos.

He noted that the display of various cultures by traditional authorities did not only project the Anlo people but sent a strong message to the world about Ghana’s rich cultural heritage, which binds the people irrespective of ethnic backgrounds.

Mr Afriyie Ankrah, also used his visit to meet some influential Chiefs in the Volta region, to seek their blessing.

Described as the most experienced amongst the candidates vying for the General Secretary position of the NDC, having served at various levels of the party.

He once served as the deputy Campaign Manager for the late Professor John Evans Atta Mills during the 2008 elections and the Campaign Coordinator for former President Mahama in the 2012 elections both of which saw NDC’s victory.

Mr Afriyie Ankrah was also the Deputy Campaign Spokesperson for Prof. Atta Mills as a Presidential candidate for NDC primaries in 2002.

In 2005, he was elected Deputy General Secretary in-charge of Operations. Among Mr Ankrah’s strong attributes are smart, influential, bold and leadership skills.