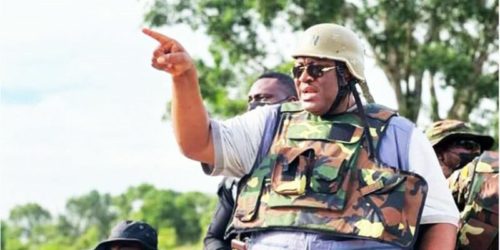 An Accra Circuit Court, presided over by Samuel Bright Acquah, has advised that the security details of the Greater Accra Minister, Henry Quartey, should to be changed, following an alleged assault on him by his family head.

According to him, if somebody could slap a whole regional minister, then his security details should be changed.

He made the suggestion on Thursday, November 8, 2022 when one Nii Odoi Kwao II, alias Robert Koomson, 61, and a retired Computer Programmer, who is said to be the head of the regional minister’s family, was brought before him for allegedly slapping Mr Henry Quartey in traffic and also threatening to kill him.

Nii Odoi Kwao II has been charged for causing road obstruction, threat of death, assault on public officer and offensive conduct conducive to the breach of the peace.

The 61-year old pleaded not guilty to all the charges and has been remanded six days into police custody.

The case was presented to the court by the prosecution team, led by Assistant Superintendent of Police (ASP) Evans Kesse.

According to the Prosecuting Officer, the complainant in the case was a police officer stationed at VVIP and attached to the Greater Accra regional minister, as his dispatch rider, while the accused is a retired Computer Programmer who lives at Osu in Accra.

He said on December 8, 2022 at about 1:10pm, Mr Quartey, together with his security details were visiting Osu and on reaching a section of the road, he observed that the accused had blocked it with his Kia Bongo car, preventing the Minister and others from accessing the road.

The court was informed that the complainant signalled the accused to give way to him and the other road users, but he refused and retorted that nobody can access the road unless he finishes with what he was doing.

The accused, according to the prosecution, rather became violent and threatened that if the Regional Minister gets closer to him (Nii Odoi Kwao II), he will kill him (Mr Quartey).

In addition to the threat, the accused resorted to using of offensive words on the minister, including a claim that he is a thief and has stolen the state money but moving freely.

The prosecutor, in description of a sequence of event, said the accused later abandoned the vehicle in the middle of the road, locked it, removed the ignition key, kept same in his pocket, rushed on the Regional minister and slapped him.

It was at this instance that the security details of the regional minister, who the court suggests should be changed, moved in swiftly to arrest the accused person and handed him over to the Regional Criminal Investigation Department (CID) Accra.

The accused allegedly admitted to the offence in his caution statement during investigation and was accordingly charged with the offences and brought before the court for trial.

The regional minister was represented by Justice Nana Oppong and the accused’s counsel was Akwasi Opoku Agyemang.

Mr Agyemang prayed the court to grant the accused bail, as the allegations are as a result of family event, since the minister and Nii Odoi Kwao II were from the same family.

He said the accused is the family head and that there was a possibility of out of court settlement.

Similarly, the accused is not a flight risk and has people of substance ready to stand surety for him, therefore, should be granted bail.

However, the prosecution opposed the bail application, drawing the court’s mind to count 2 (threat of death) and the overwhelming event, leading to the assault on the minister.

He prayed the court to remand the accused one week to enable the prosecution to file the necessary disclosures.

When the court clerk called out the case, the accused walked to the box, but told the court that he was not fit to stand, hence prayed His Honour to allow him to sit.

The court granted his request and he sat throughout the hearing of the case, after which he was handcuffed and taken away by the police.