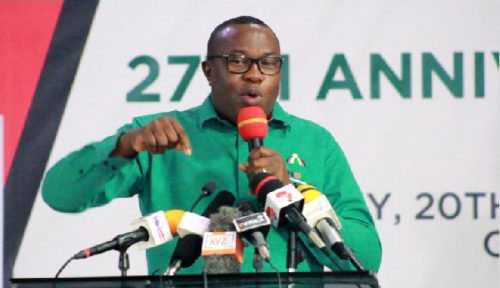 Delivering his opening address at the NDC congress on Saturday, 17 December 2022, Mr Ofosu-Ampofo said the heated contest between himself and Asiedu Nketiah will not destroy the party, saying “a mosquito you can see cannot bite.”

There have been fears that the party will break apart after Saturday’s congress due to Mr Asiedu Nketiah’s decision to contest his boss for the Chairmanship slot.

But Mr Ofosu Ampofo added that the contest between the two will only strengthen the party’s democratic credentials ahead of the 2024 elections.

He said “I want our detractors to know that our party still remains strong, and we will come out of today’s elections even stronger. The chairmanship contest between the party chairman and the general secretary will not destroy the NDC, we are all too strong and too intelligent for that.”

“Let those false political prophets from the opposing side who are predicting armageddon after today’s election be clear in their minds that today will rather mark a renaissance of the great akatamansonians,” he added.

He added that Saturday’s election “will mark the beginning of our march towards rescuing Ghana from the wickedness, ineptitude and catastrophic NPP government”.

About 9,000 delegates are expected to be deployed from the party’s various constituencies to partake in the voting process.

The two frontrunners, Mr. Asiedu Nketiah and Mr. Ofosu Ampofo have equally expressed confidence in winning the enviable chairmanship position after working tirelessly for the party.

Check below the list of candidates vying for various positions: