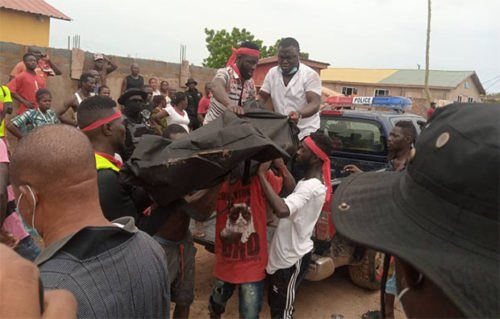 The guards at the Enchi Palace in the Aowin Municipality of the Western North Region have reportedly shot four persons dead.

The victims as gathered were gunned down after a confrontation with the guards stationed at the Palace.

The deceased reportedly stormed the palace in the wee hours of Sunday, November 6, 2022, to attack the paramount chief, Beyeeman Tano Kwaw Benbuin II but were unsuccessful as the guards on duty opened fire on them.

The lifeless body of one of the victims was spotted resting on the streets of Enchi with blood streaming from his head through to his lower belly.