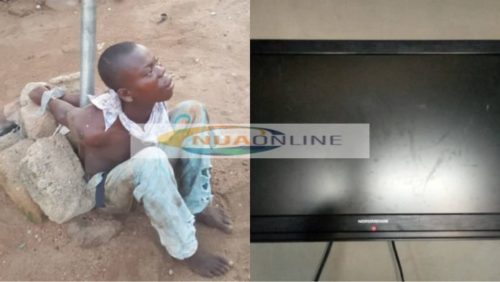 22-year-old Nii Ammo Jeiwu has been arrested by the Awutu Jei Krodua District Police command for stealing a television.

According to sources, Nii Ammo, popularly known as ‘Lighter’ is a notorious robber who has been stealing for eight years now.

According to a report by Nana Yaw Asare on Onua TV’s midday bulletin Monday, December 5, 2022, Nii stole a goat and was jailed for four years.

After his release less than two weeks ago, he sneaked into someone’s room to steal a television where he was arrested.

After his arrest by the residents, he was tied to a pole at the centre of the community and given some beatings before being handed to the police.

The suspect is currently at Awutu Jei Krodua Police custody assisting in investigation.

Previous 70% Of Ghana’s Revenues Use To Service Debt- Ofori-Atta
Next ‘Stop the Ghanaian female TV presenters from visiting the Black Stars, they ‘chop’ the players too much’ – Captain Smart to GFA