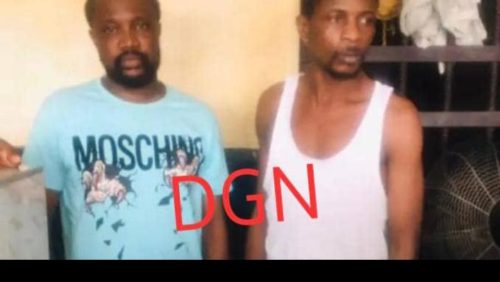 The Kasoa Ofaakor Circuit Court in the Central Region presided over by Ebenezer Osei Darko has sentenced two Nigerians to 40 years imprisonment for robbery.

However, the matter was reported to the police who mounted a manhunt and later apprehended the suspects.

They robbed the mobile money vendor an amount of GHC11,800 after the victim cashed the money from a bank at Kasoa.

Prosecutor, Detective Sergeant Addai Boamah presenting the facts to the court said that, the two Nigerian were on a motorbike monitoring the activities of the victim after withdrawing the money from the bank.

According to the prosecutor, the convicts followed the victim from Kasoa New Market to Market Junction and robbed him.

The prosecutor explained further that after the suspects succeeded, the victim chased them with his motorbike and crushed them at market junction leading to their arrest.

The presiding judge after the presentation of the facts, sentenced the suspects to 20 years each in hard labour and also commended Detective Sergeant Addai Boamah despite challenges from the suspects’ lawyers.

After the court proceedings, the victim, Hassan Nuru Yaro expressed joy for getting justice.